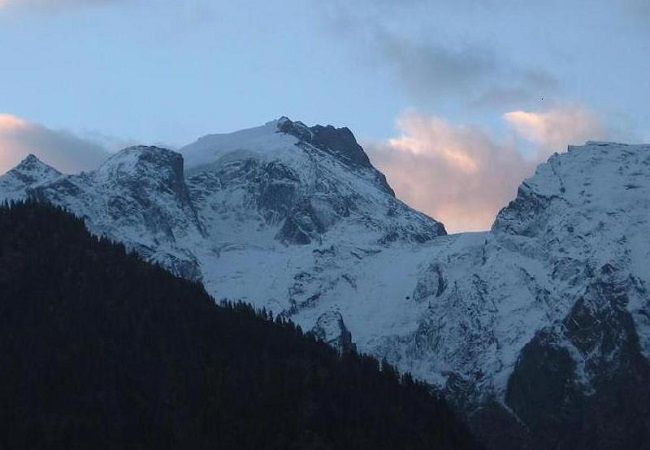 For Hindu Pilgrims seeking salvation and pay reverence to their lord, the 5 Kailash Yatras  is perhaps one of the most significant as well as arduous calling. The 5 Kailash Yatras entails long pilgrimages to 5 holy sites in upper reaches of Himalayas to seek the blessing of Lord Shiva who, as per the Hindu scriptures and legends,  is supposedly reside on the holy mountain peaks.

Mount Kailash is the most sacred peak of Asia, Located in the far west corner of Tibet. The beauty of the 6638 meters high peak, which looks like a symmetrical cone shaped ice, is echoed in various mythological and literary works.

The surroundings include the beautiful Mansarovar Lake as well as the huge Gurla Mandata which culminates at 7728 meters high. Every year, thousands of people circumambulate Mount Kailash on foot, which is considered as a holy ritual to bring fortune. The path around Mount Kailash is 52 kilometers long.

Situated around 2000 kilometers from Lhasa, Lake Mansarovar is world’s highest freshwater lake. Also known as Lake Manas Sarovar in Sanskrit and Mapham Yutso in Tibet, this huge lake mirror the image of snow capped mountains in its crystal clear waters.  The lake is located at the southern foot of Mount Kailash, and stretches up to 55 miles. The Lake Mansarovar has exceptional beauty that varies from crystal clear blue water near the shores and a deep emerald green color at the center.

Mount Kailash is one of the least visited holy places in India. There are many monasteries and places of great importance on the route to Mount Kailash. There are many stone carvings and other attractions for pilgrims. Most of the visitors take a dip in the Mansarovar Lake, which is located 18 miles away from the Mount Kailash. Soaking your head in the holy water provides spiritual benefits and only the brave could survive in the icy water.


Also known as Chhota Kailash, Mount Adi Kailash is located in Indian Territory, very close to the Indo-Tibet border. This region is suffused with exquisite natural beauty, serenity and sovereignty. If you are tired of the continuous uproar of urban life, this place will treat you with calmness and composure. During Adi Kailash trek in the Kumaon Himalayas, you will come across the massive snow clad peaks of Annapurna, the cascading Kali River, dense forests and Narayan Ashram full of wild flowers and rare vegetation of fruit gardens. Then there is Gauri Kund, whose water is a reflection of the beauty of the mountain itself. Parvati Sarovar is another nearby water body. Also known as Mansarovar, Adi Kailash houses a temple dedicated to Lord Shiva and Goddess Parvati.

[Check Out Some of the : Adi Kailash Om Parvat Terk Packages]


Located in the Kinnaur Valley of Himachal Pradesh, Mount Kinnaur Kailash is the holy abode of Lord Shiva. The trek is challenging and also rewarding for experienced trekkers. The region has got its name from the term ‘Kinner’, which are the angelic demi-gods of the Hindu pantheon. As per Hindu mythology, the angels because of the region’s likeliness to heaven choose it for their wonderful gaiety and fun. The pass accessible on the trek is the Charang La at an altitude of 5300 meters.


Located at a height of 5155 meters high, Srikhand Kailash is considered to be another abode of Lord Shiva. It lures climbers as well as religious devotees. There is a Shivalinga here. Throughout the year, the snow falls thick and does not cover the Shivalinga. The Srikhand Peak is visible from the eastern side of the village. It is a part of the Great Himalayan National Park where the thick mountain forests and the high altitude meadows.

Located 26 kilometers away from Bharmour in the Budhil Valley, Chamba Kailash is one of the most important pilgrimage spots in Himachal Pradesh. The lake is perched at an altitude of 13,000 feet at the foot of the Kailash peak. Every year, on the 8th day of the half moon in the month of ‘Bhadon’, a fair takes place at this lake. It attracts thousands of pilgrims who assemble here to take a dip in the holy waters. According to the popular belief, Lord Shiva is said to roam here with his consort Parvati. Manimahesh is approachable from different routes. Pilgrims from Lahaul-Spiti come through the Kugti Pass. The easiest route is from Chamba and runs through Bharmaur.

The celestial abode of Lord Shiva, Kailash is a sacred place for people of five faiths in the world. Mount Kailash is partially famous for its religious regions and partially for it has never been climbed with respect to Hindu and Buddhist religions.  Kailash Mansarovar Yatra takes place in the months of May and June when out on thousands only a few are selected for going on the pilgrimage. It is advisable to book Kailash Mansarovar Yatra well in advance to brighten up your chances of being on this month long sacred journey.