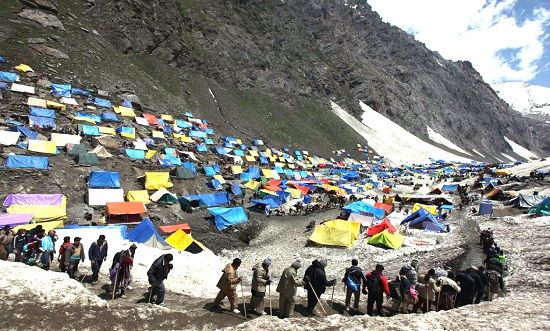 At the time of the annual Amarnath Yatra in July, around 66 medical camps will be set-up by several organizations on the two routes that lead to the Amarnath cave, placed at an altitude of 3880m in the southern Kashmir Himalayan region.

One of the official spokesmen said, “A total of 66 Medical Camps will be set up by the State Health Department, Army, Central Paramilitary Forces, police and NGOs along the two routes – traditional 45-km Pahalgam-cave route in Anantnag district and shorter 16-km Baltal-cave route in Ganderbal district.”

He added that the decision about the same was taken at an important meeting that was headed by P K Tripathi, Chief Executive Officer, Shri Amarnathji Shrine Board (SASB). Senior officials of civil administration and different security agencies were a part of this meeting that was organized to evaluate and discuss the number of medical camps that will be set-up by the Government, BSF, Army, SSB, CRPF, NGOs, and other agencies during the Yatra, which is commencing from 2nd July.

The spokesperson further added that 5 base hospitals will also be set by the health department of the state at Chandanwari, baltal, Panjtarni, Shesnag, and near the cave where expert doctors and other facilities such as diagnostic kits, ECG machines, Hyperbaric Oxygen Chambers, Blood sugar and medical and surgical kits, pulse oxymeter, Ultrasound Machines, Portable X-ray, Defibrillators and Cardiac Monitors and Automated CPR machines etc would be offered. In addition to this 9, Medical Aid Centers and 14 Emergency Aid Centers will also be set-up by the Health Department on both the routes that will also provide sufficient medicines.

He also said for the comfort of the devotees’ health facilities will be also offered by the department at Neelgrath Helipad. There are also going to be 2 Mobile Camps that will be operational along with Charri Mubarak, Lord Shiva’s holy mace. Also, 8 Medical Camps at Nunwan, Batltal, Chandanwari, Panjtarni, Brari Marg and Lower Holy cave will be established by the Department of Indian System of Medicines.

The spokesman also informed that while the Army will be setting up 6 camps, BSF will set-up 10 Medical camps along with 7 such camps by CRPF. Along with this, SSB will be having 2 camps and the local police and ITBP will be having one each on the Yatra route. Different NGOs are going to establish 3 medical camps, en-route Amarnath cave.

He informed, “These Medical Camps are located at an average distance of two km on the basis of actual conditions obtaining on the ground and keeping in view the availability of required infrastructure like water, shelter sheds, tents and sanitation facilities.”

[ Do here booking for Amarnath Yatra by helicopter / Road  ]