IHPL has always been an active member of various tourism fraternities and august bodies of the industry. In continuation of our policy of active participation, we recently visited the 29th IATO annual convention 2013 in Kochi. For the uninitiated, IATO is the acronym for Indian Association of Tour Operators. IATO is the premier travel association of all tours and travel operators of India. The theme of this year’s convention was ‘Tourism – Innovations & Partnerships’. Convention Chairman Arun Anand said that around 1,100 delegates were in attendance at the convention. He said “this is an era of partnership and cooperation. No longer can a business survive in isolation from other players in the market.” He further added regarding value additions like IATO Run for Responsible Tourism, Auction wall to lift up the funds for charity and also informed all about the inspirational business sessions. 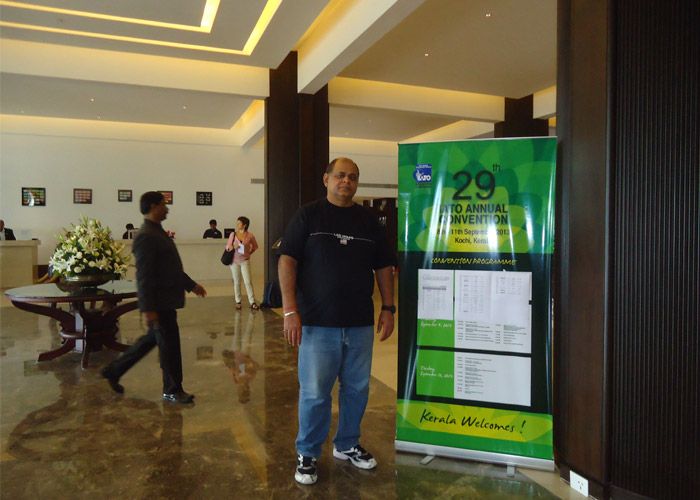 Mr.Subhash Goyal, President, IATO, shared his concern about the problem areas for the tourism industry of the country. He also was the view that for improving tourism infrastructure and bring in more relaxation in visa norms it was important that more steps should be taken, and added that extra efforts need to be taken for relaxation of visa norms and improvement of tourism infrastructure. He was of the opinion that “Tourism alone can solve India’s problems of foreign exchange, balance of payments, current account deficit, employment and poverty.” He was of the view the Centre and the States should slash down service taxes and offer income tax exemption to the tourism industry. This would help in promotion of Indian as a low-cost destination for the world travelers, a prime l advantage of fall in rupee.

K V Thomas, Anilkumar, Billa, Harikishore and Vijayan Thomas informed the attending delegates about the marketing strategies that were used by Kerala to offer a boost to its tourism. These strategies did not increase the arrival of foreign tourists, but also helped in the improvement of the economy of the state.
IATO Secretary Lally Mathews thanked Oommen Chandy, the Chief Minister for his direction and his presence for inaugurating the IATO Convention. He also showed gratitude to Union Ministery of Tourism and the Team for the assistance they had offered to the convention. He also appreciated Dr. K.V. Thomas, Mr. K.C. Venugopal, Mr A.P. Anil Kumar and all other special visitors in attendance at the convention. He specially mentioned the names of Suman Billa and Hari Kishore and his team for offering great support to this convention. He was also thankful to all state governments including Delhi Tourism, Madhya Pradesh, Gujarat, Rajasthan, Andhra Pradesh, J&K, Andaman & Nicobar Islands, Odisha and Punjab for playing an important role in the sponsorship of IATO convention.

IATO’s Hall of Fame award was given to Dr. P. Mohamed Ali, Chairman GALFAR (Middle East and MAFR Group, India) for offering his priceless service to the tourism and hospitality industry. The Kerala Chief Minister handed him the award.
The Chief Minister also honored Mr. E.M. Najeeb, Chapter Chairman, IATO and President Confederation of Kerala Tourism Industry for his proficient service in having consistent coordination with the trade and the government of the state and in making the event a complete success.
After the Inaugural session, a special cultural program was shown depicting the rich culture of Kerala. This year, IATO comprised of around 12 business sessions. The list included , Making India an Aviation Hub, Industry Partnerships – Working together for the greater good, The Media and Indian Tourism and Always Connected Travelers, The Government and the Tourism Partnership, Making a Difference – Sales ideas for high impact presentations to Foreign Tour Operators and ‘How tourism professionals in India can create a captivating and compelling Social Media presence to attract new customers and build valuable business connections’, Update on Visa Rules and Group Landing Permits, Enhancing the Strategic Valuation of Entrepreneurial Business, Working Partnerships – The future in 2025, Leadership – The Indian Way along with the others.
There was also a marketing session hosted by social media guru Philip Calvert, offered an interesting take on how tourism professionals can facilitate compelling and captivating social media which would be helpful in bringing new business along with building up valuable business connections. Later a lavish dinner enjoyed by all dignitaries at Crowne Plaza, Kochi.

A Special Note for Philip Calvert 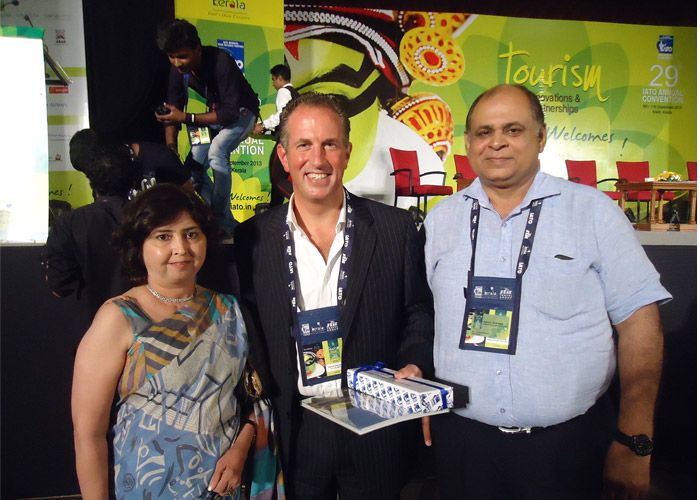 A thoroughly enjoyable interactive session which told us a lot about the power of social media in context of the travel industry. Thanks to Philip, we were indeed intrigued by the efficiency of websites such as LinkedIn in mapping and tracking the right market. Plus, his ideas about enhancing our online presence and attracting the right mix of clientele are valuable tips that we brought home. Thank you, Phil. You were a treat!

The third day of the 29th IATO annual convention had session of renowned management speaker Devdutt Patnaik who shared his views on leadership while following an Indian approach. The impressive presentation explained the audience about some key management and marketing principles, as Mr. Patnaik made effortless use of humor while citing analogies from Indian mythology. He compared ‘Swarg’ or Heaven, to a business where one could reap in benefits without making any investments.

As per him this could be achieved and he explained this by giving examples of Lord Indira, who creates the battle ground and chases his target that is ‘Lakshmi’ and Lord Vishnu who draws his target or ‘Lakshmi’ towards him by creating a playground. Devdutt left his question amidst audience whether they want to be Indra or a Vishnu? Devdutt concluded by giving references of Hindu goddesses Lakshmi, Durga and Saraswati as symbols of wealth, power and identity respectively. As per him to be successful one must know the right way harnessing these goddesses.

The 29th Convention of Indian Association of Tour Operators (IATO) came to an end in Kochi Ghulam Ahmad Mir, the Tourism Minister of the Jammu and Kashmir distributed awards to the participating states and the tour operators on the valedictory function.

The convention was a tremendous success and IHPL looks forward to being a part of many such enterprising meets.