Jainism originated and evolved in India under the aegis of 24th Tirthankara Mahaveera, who lived in the 6th century BC and gained enlightenment after 13 years of deprivation. Jainism is quite similar to Hinduism and Buddhism and pursues the cause of non violence and peace. Jainism flourished in India mostly in Uttar Pradesh, parts of Orissa and parts of Rajasthan. Jain Temple Sarnath is one of the most well revered and holy places in Sarnath.

The Jain Temple In Sarnath In Uttar Pradesh was built in 1824 and is said to be located at the spot where Shreyanshnath, the 11th Jain tirthankara was born.

Jains have had significant influence on the religious, ethical, political and economic spheres in India for over two millennia. Jainism stresses on spiritual independence and equality of all life with particular emphasis on non-violence. The Jain monks can be seen with their mouth and nostrils covered with a white cloth lest they might kill little insects or organisms by inhaling them.

Self-control is considered vital for attaining omniscience and eventually moksha, or realization of the soul's true nature. The Jains have an ancient tradition of scholarship and have also been patron to a very rich artistic tradition that can be seen in the carvings of the Jain Temples allover India. The most remarkable of Jain Temples in India are the temples at Dilwara and Ranakpur in Rajasthan. The Jains are the most literate religious community in India and the Jain libraries are India's oldest.

The Digambara Jain Temple Sarnath In Uttar Pradesh is located to the southwest of the Dhamekh Stupa in Sarnath. Inside the temple are beautiful frescoes, depicting the life of Mahavir, the founder of the present day Jain religion. The Jain Temple Sarnath has an important stepping stone in the history of Jainism in India. 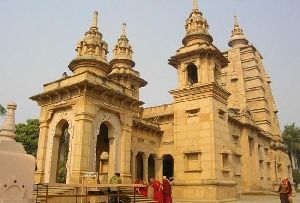