Mulagandha Kuti Vihar Sarnath is situated amidst brick ruins of ancient Sarnath, and is well known for its magnificent murals and frescos. This Buddhist Temple is relatively new and therefore offers a sharp contrast to the ruins of Sarnath; this temple also stands out with its distinct architecture which is nowhere near the style followed by Buddhist architecture. The Mulagandha Kuti Vihar Sarnath in Uttar Pradesh is particularly famous for its frescos and murals.

Sarnath (also known as Mrigadava, Migadaya, Rishipattana, Isipatana) is the deer park where Gautama Buddha first taught the Dharma. This is also the place where the Buddhist Sangha came into existence through the enlightenment of Kondanna. Sarnath is located 13 kilometers north-east of Varanasi, in Uttar Pradesh, India.

Isipatana or Sarnath was mentioned by the Buddha as one of the four places of pilgrimage which his devout followers should visit.

The Mulagandha Kuti Vihar Sarnath in India been erected by the Maha Bodhi society in the year 1931. The frescos on the walls of this monastery were done by the famous Kosetsu Nosu who happens to be Japan's foremost painter.

Built around a large compound of lush well manicured lawns and gardens, the Mulagandha Kuti Vihar Sarnath resembles a Hindu temple as far as its structure is concerned. The Mulagandha Kuti Vihar In Sarnath In Uttar Pradesh boasts of some of the most magnificent and colorful Frescoes that have been made by the magical hands of. Kosetsu Nosu a famous Japanese painter.

The frescos at the Mulagandha Kuti Vihar Sarnath are rich repositories of Buddhist literature. The frescos depict scenes from the life of Buddha and stories from Jatakas; accounts of Buddha’s disciples, miracles shown by the Lord Buddha, etc. While Frescoes dominate the interiors of Mulagandha, Murals are mainly to be seen on the exteriors. They can be seen on walls and pillars along with the outer columns.

A huge bell dominates the entrance of the Mulagandha Kuti Vihar. The royal scions of Japan have gifted this mammoth bronze bell to the temple. However, the most striking aspect of this temple is the beautiful life-size golden idol of the Lord Buddha that is installed at the sanctum.

In the campus of the Vihar you can also see the Bodhi tree whose sapling was brought from a tree in Sri Lanka, which was in turn grown from a sapling of the original Maha Bodhi tree under which Buddha gained enlightenment at Bodh Gaya, 2500 years ago. Mahendra and Sanghmitra, son and daughter of Ashoka the Great respectively, took the sapling from this original tree during their voyage to Sri Lanka. 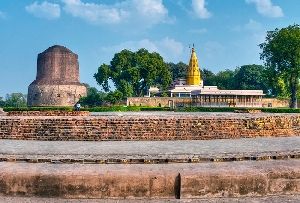