The whole of India is celebrating the news of Jaipur’s entry into the list of World Heritage Sites. The best thing is that now the Pink City is protected. All illegal constructions and other harmful acts will be stopped that could damage the glory of this walled city. Jaipur’s inclusion in the World Heritage Site has raised the number of heritage sites in India to 38. The announcement was made at the 43rd Session of the UNESCO World Heritage Committee, held from June 30 to July 10 in Baku (Azerbaijan).

Every citizen of India especially the Rajasthanis are overwhelmed at the great recognition of the city by UNESCO. From common people to celebrities, everyone is glad at the news and sharing their feelings on social media. The Prime Minister Narendra Modi has tweeted as “Jaipur is a city associated with culture and valor. Elegant and energetic, Jaipur’s hospitality draws people from all over. Glad that this city has been inscribed as a World Heritage Site by @UNESCO”. 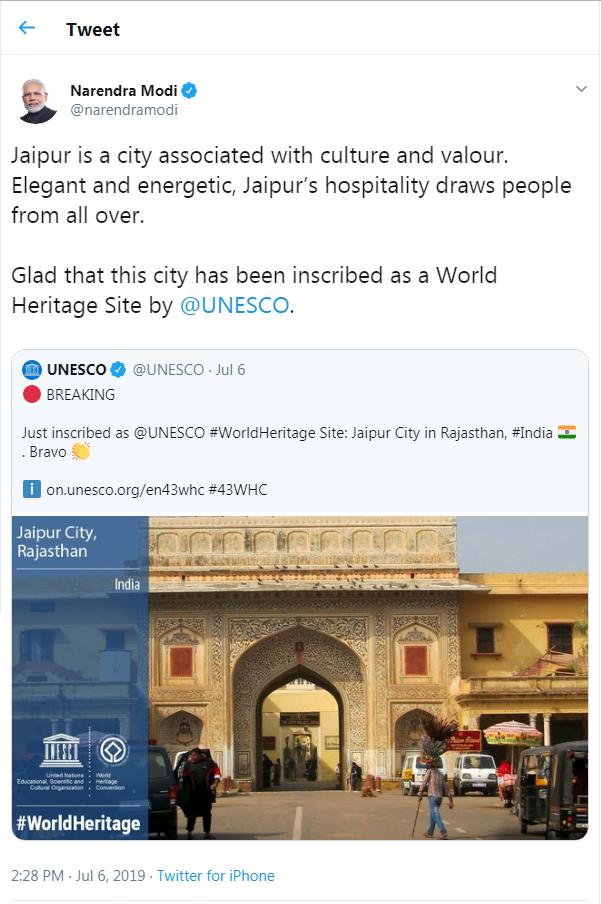 The Rajasthan chief minister Ashok Gehlot wrote in his congratulatory message “It is a matter of great pride that our Pink City, Jaipur has been declared as a world heritage site by UNESCO. It will add to the glory of the capital city of Rajasthan.” Princess Diya Kumari’s tweet reads as “Jaipur’s walled city has been declared a World Heritage Site by UNESCO is truly an honor for the Pink City.” 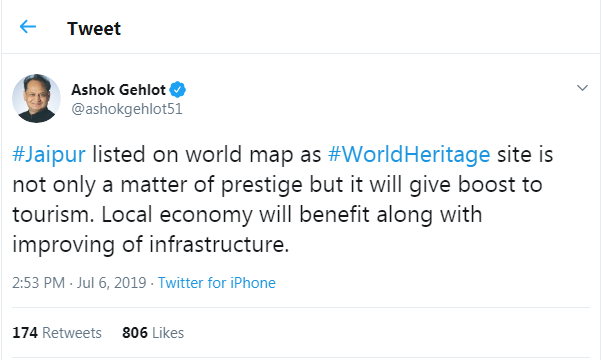 Let’s find the prime factors behind Jaipur’s inclusion in the World Heritage Site.

The effort of Indian Tourism – This is unarguably an achievement for Indian tourism and the promotions of Incredible India. Jaipur is the second walled city to be listed as a World Heritage Site after Ahmedabad. And after being tagged as a World Heritage Site, Ahmedabad, has experienced a 13% hike in tourism. So, Jaipur already a top tourist destination is likely to see a boost in tourism in the coming years.  Just after the announcement, the director of UNESCO India Office Eric Falt, said In his congratulatory message “celebrates yet another of India’s outstanding heritage sites, only one year after the successful nomination of the Victorian Gothic and Art Deco Ensemble of Mumbai in 2018. I would like to wholeheartedly congratulate the government of India, the state of Rajasthan and the city of Jaipur on this successful nomination”.

Exchange of Ideas is Always Great – Undoubtedly, Jaipur is the city of great monuments and palaces. But, there are many places in India and other countries offering excellent architectural pieces. Then why has Jaipur been selected from 36 other nominated cities?

Here is the wonderful description of Jaipur by the Ministry of Culture before the world heritage committee, “the pink city is an exceptional urban example in indigenous city planning and construction in South Asia”. “Besides exemplary planning, its iconic monuments such as the Govind Dev temple, City Palace, Jantar Mantar, and Hawa Mahal excel in artistic and architectural craftsmanship of the period.”

According to UNESCO, the palaces of Jaipur reflect a blend of ancient. Modern, and medieval architecture. For instance, the City Palace, this monument is planned in the light of Vedic architecture and the exterior shows a combination of Mughal and Rajput style of art. The other winning factor is the planning of the city. Jaipur is planned as beautifully as a modern city. And here the credit goes to King Sawai Jai Singh II, the founder of the city who himself was a great architect.

The Proud Rajasthanis – The Rajasthanis deserve to rock today. Along with the amazing city planning and beautiful palaces, the valor Rajasthani culture also worked as a winning factor. The way Rajasthanis sustain their century-old culture is really appreciable and is one of the prime objects for tourist attraction.

Jaipur receives the maximum number of tourists every year. Apart from the majestic forts and palaces, the city is also famous for century-old traditions and culture. The city was founded during the reign of Sawai Jai Singh II. The king who himself was a great architect engaged famous architect Vidyadhar Bhattacharya to plan the city according to the rules of Vastu Shastra. Thus, Jaipur distinguished itself for being the first planned city. Jaipur reflects the real essence of India’s age-old opulence and grandeur. There are endless attractions in Jaipur that include Amber Fort, Hawa Mahal, Jantar Mantar, and City Palace. There are other sites like Jaigarh and Nahargarh, which are also great for exploration. Apart from architectural excellence, tourists in Jaipur also cherish the lovely gardens like Central Park and Vidhyadhar Gardens. So there is no doubt that Jaipur truly deserves the status of World Heritage Site.