Forts and Palaces in Ajmer

The picturesque city of Ajmer is a popular pilgrimage ground for the Hindus as well as the Muslims. Ajmer, situated on the southwest of Jaipur, is an oasis wrapped in the green hills. There are innumerable beautiful and aesthetic Forts and Palaces in Ajmer. The Ajmer Forts and Palaces are really a site to watch and something to look out for.

There numerous Forts and Palaces in Ajmer include the Taragarh Fort, Akbar Fort, Bijay Niwas Palace, Mansingh Palace and much more. The other Forts and Palaces in Ajmer, India and other beautiful places to look out for in Ajmer are The Dargah, Shahjahan's Mosque, Adhai-din ka Jhonpra, Mayo College, Pushkar Lake, Man Mahal, Foy Sagar, Ajmer Sharief and the list goes on and on.

The Taragarh Fort is another beauty which must definitely be visited. A steep climb beyond the Adhai-din ka Jhonpra leads to the ruins of the Taragarh Fort. This steep climb takes about one and a half hours and the visitors finally reach the fort which is perched on a hill. It is possible for the visitors to have a brilliant view of the city from the fort.

Amongst all the Forts and Palaces in Ajmer, Rajasthan one of the most beautiful palace to visit is the Mansingh Palace. The Bijay Niwas Palace is also another masterpiece showing the excellent work of art and skill that was involved in building the palace. The Bijay Niwas Palace was built by Thakur Bijay Singhji in the year 1910. The mind blowing monument is an excellent amalgamation and mixture of the Rajputana and Colonial architectural styles. 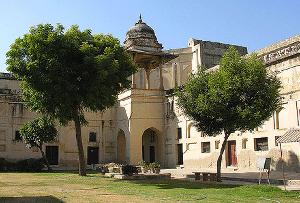 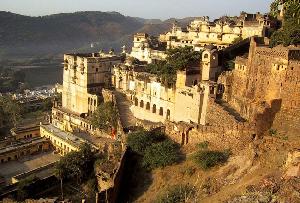