What is the first sight that greets a visitor upon arriving in India? Crowds! Crowds everywhere. The enormous size of the country, coupled with its teeming millions, can indeed be intimidating. However, there are certain places in India which seem to burst at the seams. If one were unaware of the almost magical way in which an order exists amid this apparent disorder, one could simply dismiss this enormous congregation of humans as a chaotic mess.

Attend a festival, or visit a shopping center in one of the cities around the country, and you would think that the entire city seemed to have spilled on the streets. These are occasions when landing your next step is as challenging an endeavor as turning your head, left to right or vice-versa. The question here arises, why would you want to plant yourself amidst the maddening crowds? Well, if for no other reason, than for the fact that India is as much its monuments, landscape and culture, as its crowds, with one inextricably linked with the other. If you are willing to take this daunting challenge, this blog brings you the most crowded places in India. 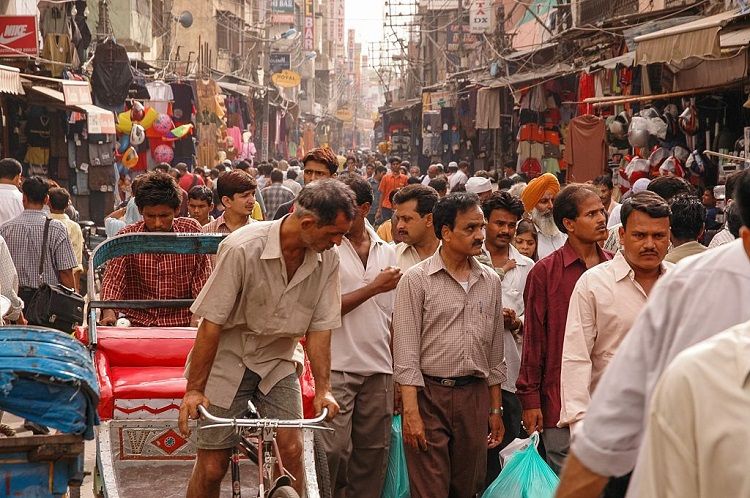 A maze of shops along with wires entangled overhead, with people inching their way forward, stopped occasionally by the colorful rickshaws, this is the famous Chandni Chowk in Delhi. This is where you find the most ardent shoppers looking to lay their hands on a great deal, or savoring the delights of various snacks found in the various eateries here. As a visitor, you will find shopping in New Delhi to be quite a glitzy affair, but none hold sway over people’s hearts like this one.

This street has its origins in the 17th century, when Mughal Emperor Shah Jahan is believed to have established the city. Once a grand promenade which witnessed royal processions, today its narrow winding lane sand alleyways are packed with vendors jostling between themselves for both space and customers. Whatever its history maybe, today, it is one of the places where the crowds flood the streets all the time.

Mumbai during the Ganesh Festival 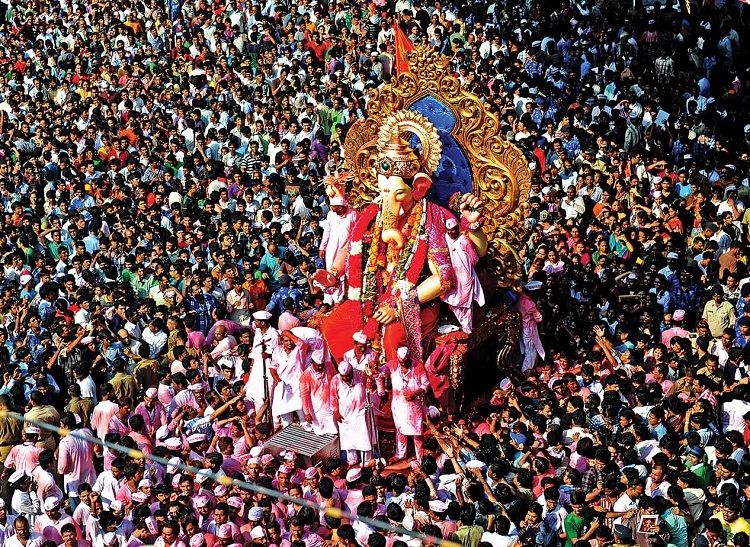 Mumbai is crowded everywhere, in its local trains, its flats and colonies, on the roads and anywhere you set your sights upon. However, the entire city seems to move forward in one great procession on the festival of Ganesh Chaturthi. On the last day of the festival, crowds can reach tremendous proportions.

It’s this unique spectacle that makes it one of the major tourist attractions in Mumbai. Carrying the colossal statue of Lord Ganesh, fondly known as Lalbaugcha Raja (the King of Lalbaug) through the streets, people engage in vigorous dancing accompanied by loud music. If your stay in India happens to coincide with the occurrence of this festival, then participate in it, and know what it really means to become “part of a crowd”.

Jama Masjid in Delhi during Ramadan and Eid 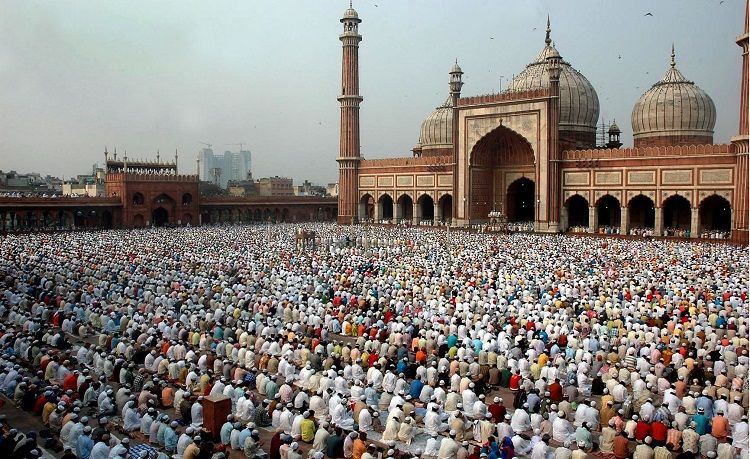 Jama Masjid in Delhi, counted amongst the largest mosques in India, was built by Shah Jahan between 1644 and 1656. A splendid example of Islamic architecture, it draws massive crowds during the Islamic holy month of Ramadan, which only comes to end on the occasion of Eid.

When viewed aerially, the thousands of people, hunched over for a common cause, make for a wonderful sight. Their synchronized bodies, and minds, are indeed a visual spectacle. After the prayers are over, the people head for the streets in an extremely orderly manner, making for another impressive sight.

Allahabad during the Maha Kumbh Mela 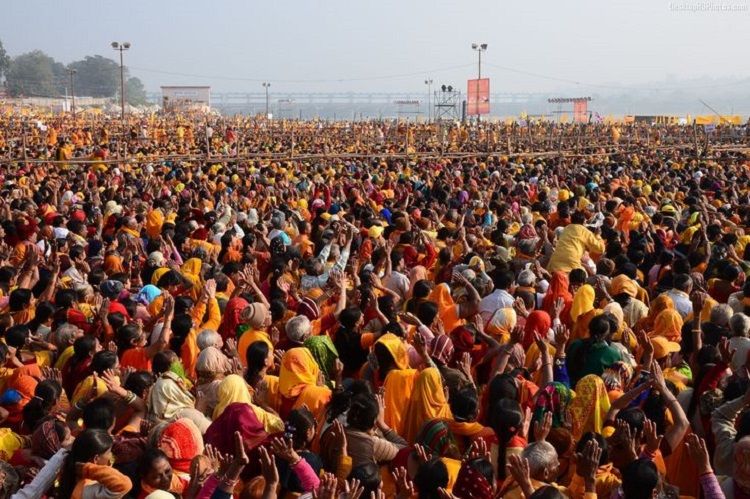 However, none of the festivals or places attract as much crowd as the Maha Kumbh Mela, undoubtedly the largest religious gathering in the world. Held on a rotational basis in four of the holy places in India – Nashik, Ujjain, Haridwar and Allahabad, it witnesses a sea of humanity converge on the banks of the holy rivers, taking a dip and performing various rituals in the hope of seeking salvation.

What may befuddle the first-time onlooker, who may very well mistake this festival for an exodus of some kind, is the systematic proceedings with which the entire event is conducted. Held once every 12yrs at Allahabad, one of the holy places in Uttar Pradesh, it witnesses the erection of a temporary “tent-city” spread over 2,000ha.

Inside the Mumbai Lifeline 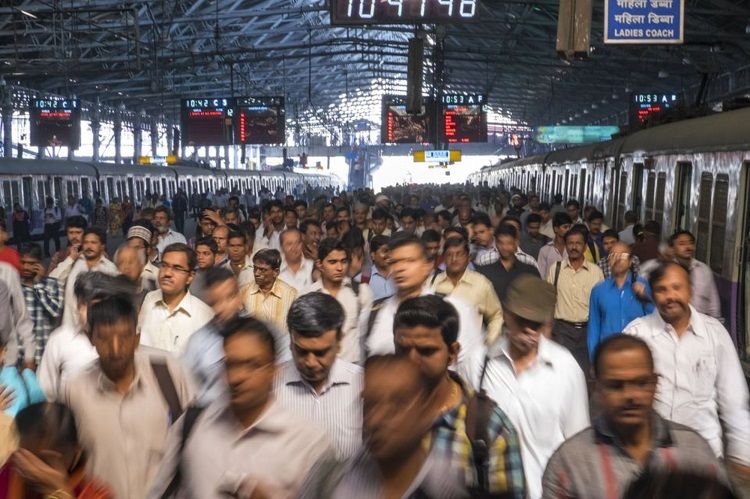 If pushing and getting pushed, elbowing and getting elbowed does not deter you much, try taking a ride on the famous local train of Mumbai, otherwise known as the “lifeline of Mumbai”. During the rush hour, boarding a train in this city is a test of one’s agility, strength, and most of all, patience.

However, the challenge doesn’t just end there. Finding enough space to plant yourself inside a train’s compartment is as much a challenge. No wonder, these trains, overflowing with people, give the ultimate test of endurance! According to statistics, Chhatrapathi Shivaji Terminus (formerly Victoria Terminus) in South Mumbai, operates almost 1,200 trains with almost 6,00,000 passengers every day.

Puri in Odisha during the Rath Yatra Festival 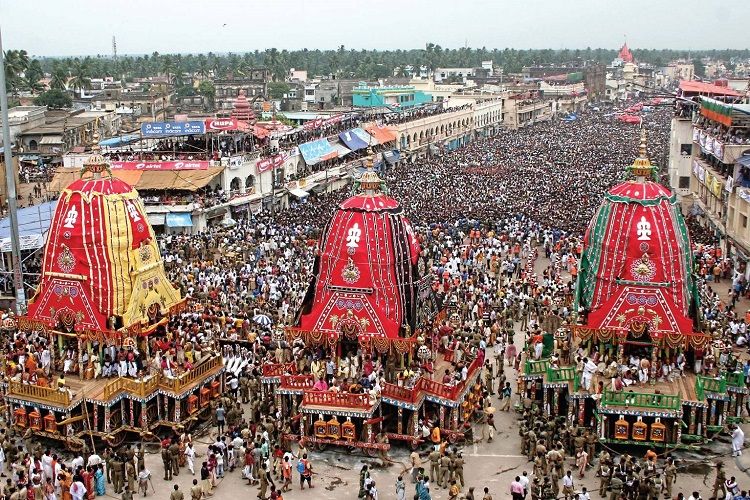 Once a year, the entire population of Odisha, it seems, spills over into the streets, all enthusiastic and eager for the Rath Yatra Festival in Puri, the most holy place in the state. Originating in the 12th century, it’s considered to be one of the oldest festivals in the world. This festival is a true test of the devotees literally, as they pull the enormous chariots, within which are housed the idols.

According to mythology, Lord Jagannath (believed to be a reincarnation of Lord Vishnu and Krishna), after leaving his temple in Puri, visits his birthplace and aunt’s home along with his elder brother Balabhadra and sister Subhadra. During the entire course of the journey, anyone who catches a glimpse of the chariots or touches one of them, is considered blessed. However, that may be a challenge, considering the procession attracts more than a million pilgrims! 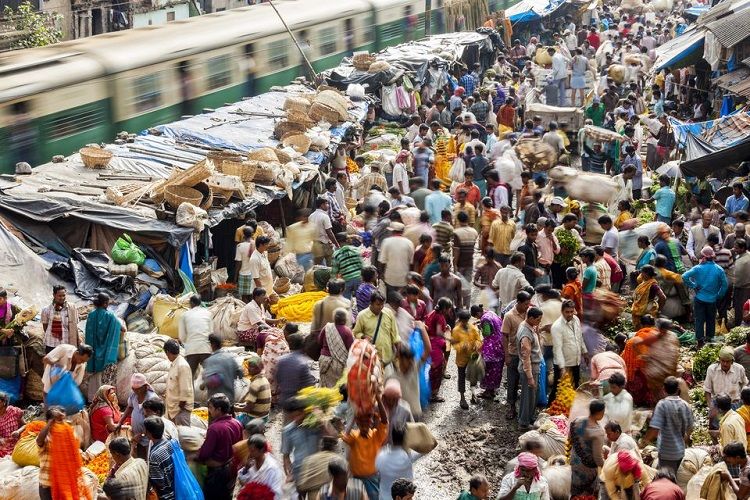 The various fairs and festivals in West Bengal are famous for attractions large crowds, and the Mallik Ghat Flower Market comes quite close to being a festival in itself. We all know that flowers attract bees, and people. Sometimes, thousands of them! At the Mallik Ghat Flower Market in Kolkata, every Sunday morning, one can witness a densely packed crowd consisting of both buyers and sellers, haggling over the prices of fresh flowers.

This bustling market, apart from being a century old, is one of the largest wholesale flower market in all of Asia. Explore the intricate lanes, discover the flowers of your choice, haggle over the price of it, and have a flowery day!

Around the Charminar in Hyderabad 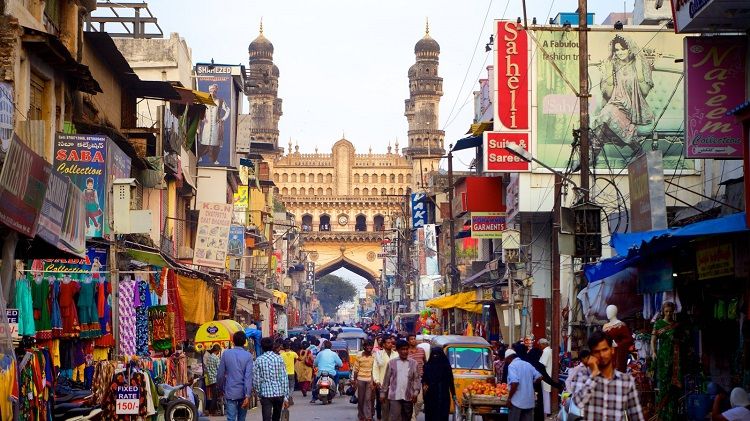 The Charminar is one of the global icons of Hyderabad, and the reasons behind its construction are mired in controversy. Travel to any of the famous attractions across India though, and you will find it swarming with large crowds. This fabulous piece of Islamic architecture is no exception.

The area surrounding the Charminar is a picture of noise and unending traffic. The attraction lies in the heritage that the entire place is associated with. If you like shopping, then some of the items to watch out for are jewelry, textiles and cheap perfumes.

Juhu Beach in Mumbai on a Sunday 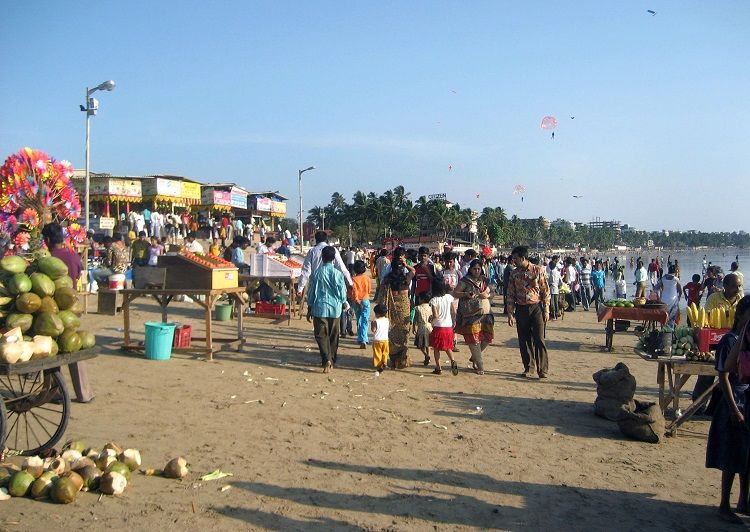 Juhu Beach, located on the shores of the Arabian Sea, is as good a beach as any. Locals and tourists visit it to enjoy the beautiful view and spend a day in complete leisure. Visit it on a Sunday though, and the entire beach takes on the appearance of a carnival.

What you would find here are vendors selling snacks of different kinds, people enjoying a stroll with a delicious snack accompanying them and of course, an enormous crowd. Naturally, sunbathing is the last thing on people’s minds here, atleast on a Sunday. Here, it’s all about entertainment, and having your share of fun. One could even count a trip to this market as one of the tourist attractions in Bangalore. Established in 1928, this wholesale market area stands on the site which was once a battlefield. The colorful setting of this market makes for some exciting photography too.