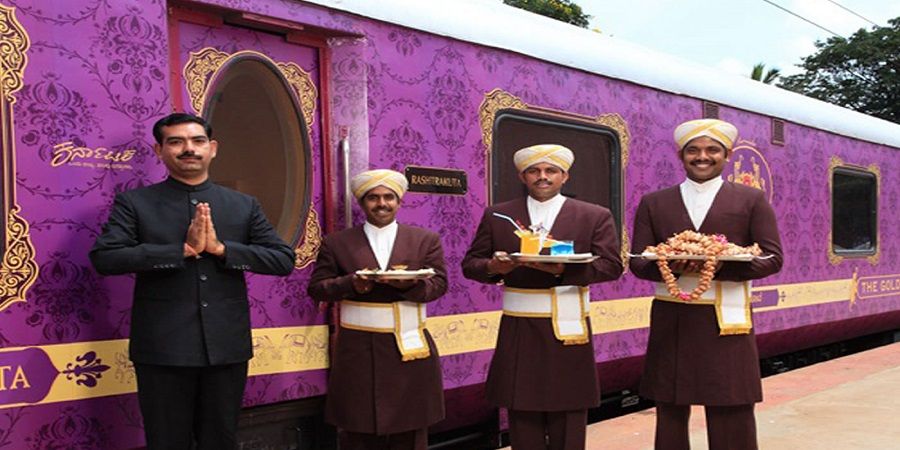 Ever been a part of the royal journey by the Golden Chariot? The luxury trains give you a dream come true experience touring through the southern splendors. This royal vehicle takes you past some of the best destinations that promise you more than you can expect. From the cosmopolitan Bangalore to Mysore with historical charm, you can experience it all during your trip by the Golden Chariot train.

Southern India has a special lure of its own. On one hand it nurtures the urban culture, while on the other it preserves its ancient heritage of art and culture. Being a hub of music and various art forms like Yakshagana and Theyyam, South is one of the favorite tourist regions in the world. The flavor of south is sure to allure you during the Golden Chariot train journey.

The train is away from being just a simple vehicle for touring the ecstasies of Southern India. It is internationally famous for being an Indian luxury train with accommodations that promise both comfort and style. Golden Chariot train belongs to the Karnataka State Tourism Corporation. It was named after the Stone Chariot of village of Hampi. The luxury train covers several destinations like Kabini, Goa, Mysore and Bandipur. You can live the ancient ages in Karnataka and rejuvenate your senses at the beaches of Goa during your Indian holiday.

From the historical charms of the Vijaynagar kingdom in Hampi to the resplendent beauty of the Garden City of India, Golden Chariot train takes you past the wealth of South India. The rich cultural heritage of Southern belt of India is worth a visit.

Through the royal journey by the Golden Chariot you are sure to get pampered by the services. The luxury train takes care of all your needs from good food to great ambiance. The royal treatment that the train specializes in is one of the biggest attractions of being a part of the memorable journey.

Tour itineraries covered in the Golden Chariot trip include:

Kabini: The Chariot train takes you to the beautiful Nagarhole National Park. This is situated on the bank of Kabini River. The place is rich in flora and fauna. It is known to be famous hunting grounds for the kings of Mysore dynasty.

Mysore: A visit to this city of palaces is one of the best places covered by the Golden Chariot. The luxury train takes you to the island fortress of Tipu Sultan.

Badami: Golden Chariot takes you to Badami, which is known for its 81 sculptures showcasing different dance forms.

Bangalore: The luxury train takes you to the beautiful Garden City of India or Bangalore. The Silicon Valley is mainly known for its artistic temples and gardens.

Bandipur: A visit to the Bandipur National Park is always a delightful experience during the tour. With the Nilgiri offering great views, wildlife enthusiasts have a time of their life at the National Park.

Hampi World Heritage Site: The luxury train takes you to the beautiful Hampi village with traces of the famous Vijaynagar Kingdom.

Goa: The royal vehicle takes you to the refreshing Goa with its innumerable beach wonders.

The royal journey by the Golden Chariot pampers you all the way with special surprises and great services. You can tour through Southern India in one of the best trains and collect memories of the journey to be cherished forever. Know more about this luxury train and the tour from Indian Holidays.