Karni Mata Mela is a famous festival in India. It is a festival dedicated divine Karni Mata. Worshipping Karni Mata is regarded auspicious by the people of Deshnok. According to Hindu mythology, it is believed that the Goddess posses supernatural powers. The festival is predominantly celebrated in Deshnok. It is celebrated twice a year.

The Karni Mata Mela is a great attraction for tourists. The mela features a number of cultural and religious programs. On the first day of the mela, the temple opens at 4 am to offer puja to the Goddess. The statue of the Goddess is beautifully decorated with the golden crown. It is also decorated with expensive jewelries and garlands. The puja is followed by an aarti. The puja also includes offering Bhog and Prasad to the deity.

Large number of tourists visit this fair as they get a close look of the rich religious traditions of the place. Moreover, the beautiful architecture of the temple is also a major draw for the tourists. Made of marble and other stones, the Karni Mata temple is a pretty sight. The statue of the deity, made of 75 cm of yellow marble, is also a beautiful sight. 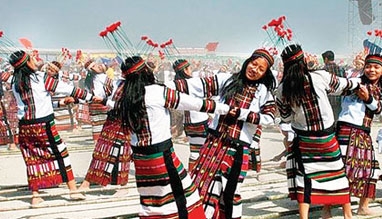