Heralded as one of the holiest sites for Buddhist pilgrimage in India, Sarnath in Uttar Pradesh is famous as the site where Lord Buddha had delivered his first sermon after attaining enlightenment. Home to some of the most extensive ruins among sacred Buddhist sites, Sarnath houses several stupas, excavated ruins of age old monasteries, temples, museums, gardens and various other interesting sites. Prominent among the tourist attractions in Sarnath is the Chaukhandi Sarnath – one of the finest Monuments in Sarnath.

The Chaukhandi Stupa in Sarnath is the first monument you will witness as you enter Sarnath. An important Buddhist stupa in Sarnath, Chaukhandi has considerable historical significance. It is widely believed that Chaukhandi Sarnath was originally built as a terraced temple during the Gupta period between the 4th to 6th centuries. Later, Govardhan – the son of a local king modified the stupa to its present form by erecting an octagonal Mughal tower surrounding the square edifice of the stupa. The tower was built to commemorate the visit of Humayun – the powerful Mughal Ruler.

Chaukhandi Sarnath marks the site where Lord Buddha reunited with his five companions who had previously left him at Bodhgaya. History has it that after attaining Enlightenment in Bodhgaya, the Buddha traveled to Sarnath, whereupon he delivered his first sermon to these five companions at the Deer Park in Sarnath. It is at this deer park of Sarnath where the Lord preached his first discourse. Thus was set in motion the ‘Wheel of the Dharma’. Chaukhandi Sarnath is a historical site that evokes a lot of emotion among Buddhist pilgrims and regular tourists who visit Sarnath.

A structure made predominantly of bricks, Chaukhandi Sarnath is a must visit site on any tour to Sarnath.

Presently, Chaukhandi in Sarnath Uttar Pradesh stands as a high earthen mound covered with an edifice made of bricks and topped by an octagonal tower. The stupa is maintained by the Archaeological Survey of India.

A lofty mound of brickwork surrounded by an octagonal Mughal tower, Chaukhandi Sarnath stands on a terraced rectangular plinth. This low circular funeral mound is encircled by large stones. Recently, the Archeological Survey of India has started restoration work on the Chaukhandi stupa in Sarnath that has for ages been in depleted condition.

Several stupas, excavated ruins of age old monasteries, the deer park and various other interesting sites constitute the major tourist attractions in Sarnath. Besides the Chaukhandi Sarnath, other must visit monuments on Sarnath include the the Dhamek Stupa, Ashoka Pillar and others. 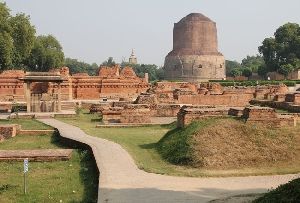 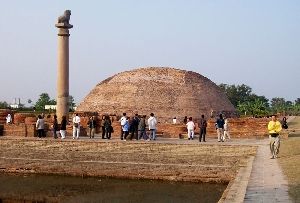