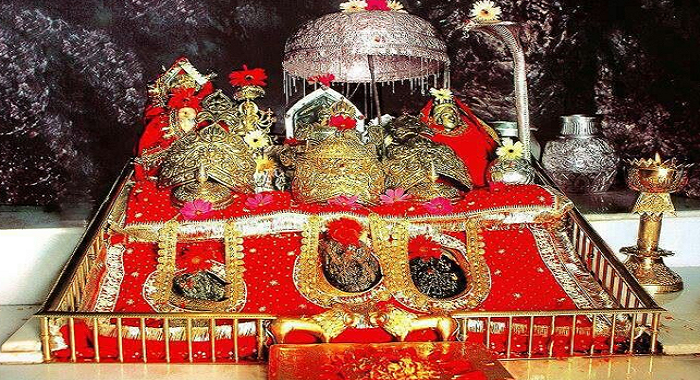 Vaishno Devi is a famed religious site among Hindus, which is situated on the Trikuta Hill in the town of Katra of Reasi district. This is one of the most revered pilgrimage sites in Jammu and is visited by millions of devotees every year from all over the world. This is among 108 Shakti Peetha of Goddess Durga.

This cave temple is dedicated to the Hindu Mother Goddess, who is believed to be an incarnation of Goddess Durga. The goddess resides inside the cave in the form of 3 Pindis or the natural rock formation.

There is no idol in the sanctum sanctorum of the cave temple. There are numerous legends and mythological stories associated with the 3 Pindis of Vaishno Devi and the cave temple, which holds religious importance among the pilgrims.

Take a look at the detailed information about the 3 Pindis in Vaishno Devi Temple.

Mata Vaishno Devi Cave Temple is nestled in the lap of the Trikuta Parvat, which got its name due to the three peaks of the hills. The holy cave comprises three natural rock formations, which are known as Pindis and are believed to be a symbol of Mother Goddess.

There are three Pindis in Vaishno Devi, which are dedicated to three goddesses namely Maha Kali, Maha Lakshmi, and Mana Saraswati. 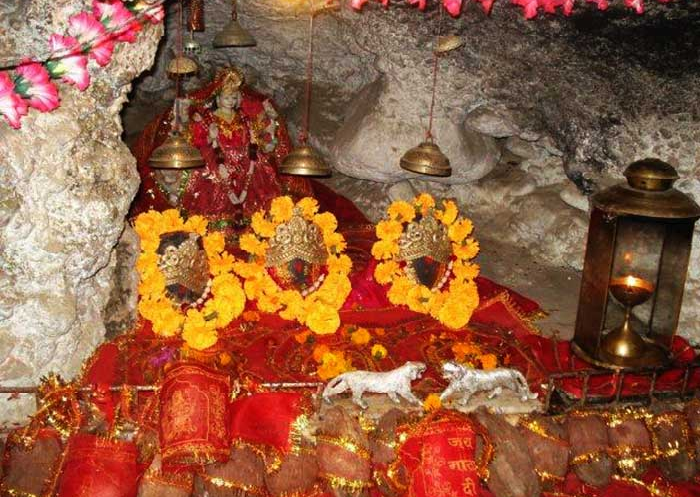 The Pindi on the extreme right is devoted to Goddess Maha Kali, which is black in color. The black color is associated with the name of Maha Kali and she is believed to be a basic source of all the mystical as well as unknown energies of the universe. She guides her devotees to conquer the forces of darkness.

The second Pindi which is located in the middle is the holy Pindi of Goddess Maha Lakshmi. It is of Pitambar or golden yellowish color, which is the color of the Goddess Lakshmi. She is the supreme energy of maintenance and also represents Rajas Guna in the quality of inspiration as well as effort. She is believed to be a basic source of wealth, prosperity, and material gains.

The third and the last Pindi, which is located on the extreme left, is worshiped as Mata Maha Saraswati. She is believed to be the supreme energy of creation that represents Sattva Guna. This Pindi of Maha Saraswati appears to be white in color. She is considered the basic source of creation, knowledge, wisdom, art, and righteousness. 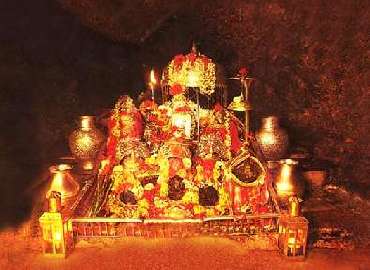 Legends of 3 Pindis of Vaishno Devi

There are numerous legends surrounding the Vaishno Devi Shrine according to which, the temple is a manifestation of a Hindu Goddess Mata Adi Shakti or Adi Parashakti. In the Treta Yuga, when the demons started to destroy the world with their evil energies, the Tridevi, or three goddesses namely Maha Lakshmi, Maha Parvati, and Maha Saraswati merged their energies to get rid of this.

With their energies, Goddess Vaishnavi was born to defeat all the demons and evils that were tainting the world. She took a human form and helped people with their problems. This upset a local tantric, Bhairav Nath.

He was surprised by the divine power of the little girl. To hide from him, she hid in the Trikuta Hills for nine months. He kept searching for her but couldn’t get a hint of her whereabouts. Then, one day he saw the girl producing water from a stone by shooting it swiftly with an arrow.

On seeing Bhairav, she entered a cave. Bhairav Nath quickly followed her into the cave and with a trident, she opened a path on the other end of the cave. She left the cave but Bhairav adamantly continued to follow her.

Finally, she took her real form and cut off Bhairav Nath’s head. Due to his powers, his head died but his body remained alive. He begged the goddess for forgiveness. She not only forgave him but also gave him a boon that the devotees who would come to worship her in her holy cave would visit his temple thereafter. Later a temple was built at the place where Bhairav’s head fell.

After this, she was asked to stay on earth and continue to protect it. To which, she agreed and took the form of the 3 Pindis, which depict the three divine energies that were merged for her creation. This Holy Cave is known as Vaishno Devi Temple. You can plan your trip to Vaishno Devi and make your trip memorable with us!

Plan your Vasishno Devo Yatra with our exclusive list of packages