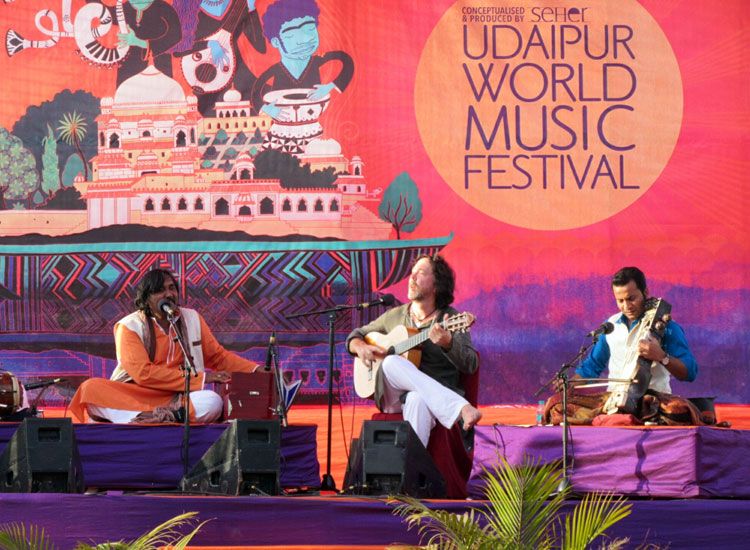 Rajasthan in essence is royal, festive and truly exhilarating. While the royal pleasures give you enough reasons, travel to Rajasthan has a number of amazing reasons per their interest. Festivals in Rajasthan is one of major lures that draw people from across the world. Impressive traditions, colors, sights and experiences open for all th

Representing history, culture and charm of the royal state, you must attend Festivals in Rajasthan  To showcase Rajasthan’s rich cultural heritage, every year some major festivals take place across the state in different months on different themes. You could participate in these festivals to witness the vibrant history and culture of Rajasthan. Our guide is about some festival that is major as well as worldwide popular among history and cultural events lovers!

So read on and tell us when you are coming to experience these! 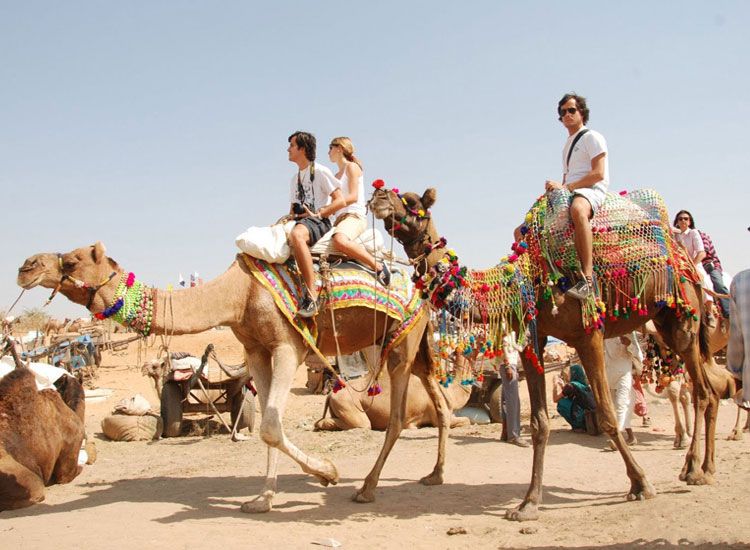 The famed Pushkar fair is one of the largest camel fairs in the world. The fair takes place for five to fifteen days annually in the holy city of Pushkar on the banks of the Pushkar Lake. The main activity of this fair is the trading of livestock such as camels, horses and cattle.

Pushkar Fair has become one of the major tourist attractions of Rajasthan. Some of the enthralling competitions such as matka phod, longest moustache, turban tying and balancing on camel contests are part of the fair. During the Fair, the quaint village becomes an extraordinary place of color, music and movement. 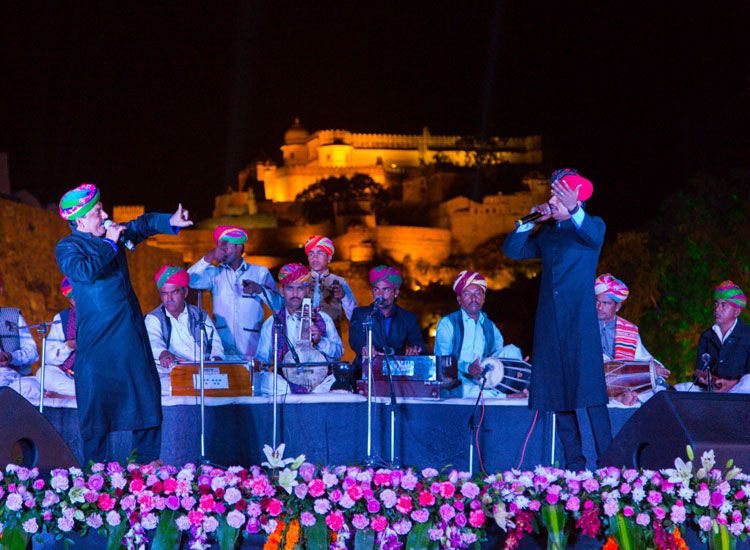 Kumbhalgarh Festival celebrates the passion of Rajasthani culture. It is a coming together of India’s finest classical musician, artists and dancers. The festival honors the memory of Maharana Kumbha, Kumbhalgarh’s creator, a great advocate of Indian martial and fine arts, architecture and learning.

Kumbhalgarh festival has mainly two parts, one in the day time and other at evening. In the day, there are wonderful folk performances by the artists of Rajasthan. Evening is impressive as the cultural programs are added with the sounds, lights, colors and an element of enigma.


Folk culture of Rajasthan along the backdrop of the mighty Kumbhalgarh Fort. 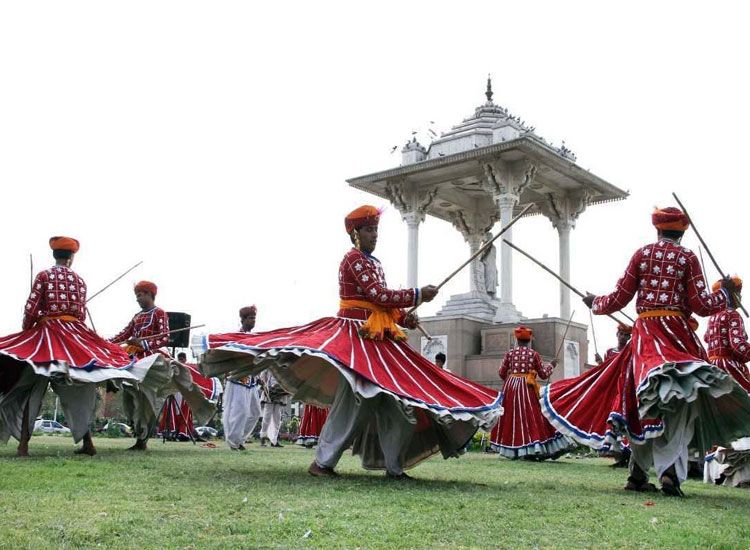 The Winter Festival in Mount Abu is held every year during the last week of December. The only hill station in Rajasthan is seen drenched in fun and festivities. This three- day colorful festival is organized by the Rajasthan Tourism and Municipal Board, Mt. Abu. The exotic location make this festival a never to be forgotten experience.


A ceremonial procession from Nakki Lake declaring the start of the festival, Sufi Kathak, folk dances such as Daph, Ghoomar, Gair, etc. Hot air ballooning is the latest addition. 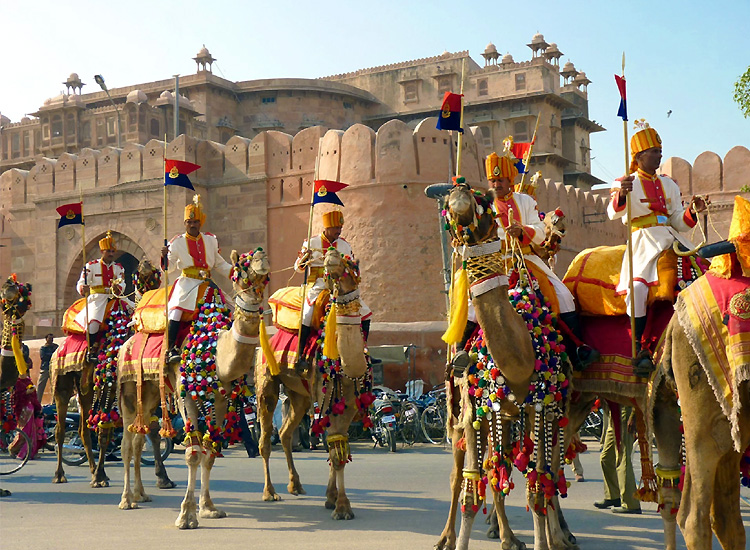 The Camel Festival in Bikaner is a two -day celebration of rural Rajasthan. The highly popular festival of Rajasthan, Camel fair starts off with a colorful parade of beautifully adorned camels against the backdrop of majestic Junagarh Fort. Apart from colorful parade by camels, the festival witnesses best traditional Rajasthani folk dance performances and musics.

One of the best thing that should not be missed in Camel fair Bikaner is fascinating Fire Dance. It adds glamour to the festivities. The melodies of folk music are truly captivating. The puppet shows in Camel Fair, Bikaner are a rare art, where the colorful attired puppet dolls narrate intriguing local folklores. The spectacular firework display illuminates the skies of Bikaner and concludes the event.

Highlights of  the Festival

Fire Dance, Mystical walk on Fire, Folk performances and of course the huge population of camels. 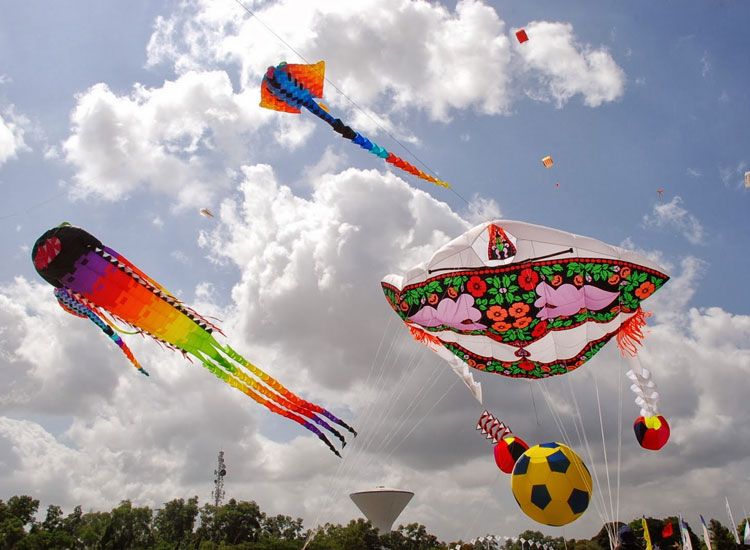 Kite flying is a sport and Jaipur celebrates this passion as a festival. Come January and the skies are dotted with a profusion of different colors, shapes and sizes, fluttering and darting above the rooftops, triumphantly cutting another kite’s string, and soaring way up above the earth.

The Jaipur Tourism Development Corporation organizes the International Kite Festival at a local stadium, where kite enthusiasts from all across the globe show off their kite-flying skills. A kite market is also held, alongside which are food stalls, cultural performances and special kite displays at night, when illuminated kites known as Tukals are flown.


The high-power kite competition and the sky full of kites of all sizes, colors, shapes and designs. 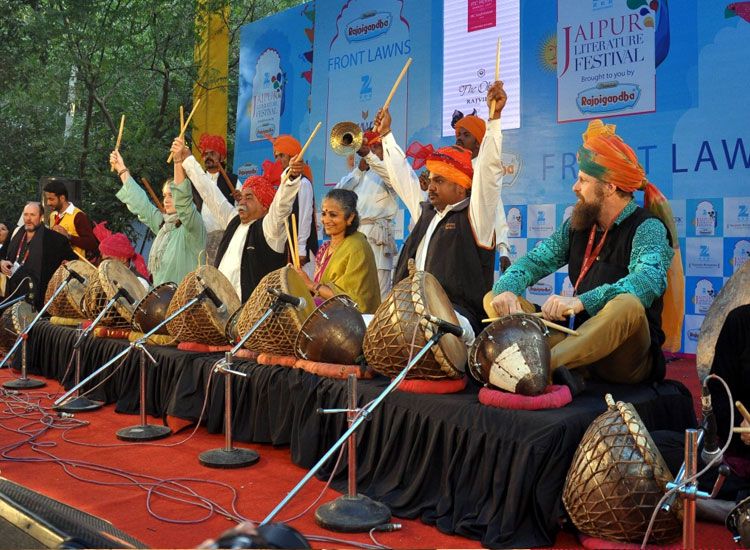 The discussions, readings and debates by Man Booker prize winners, local writers, Nobel Laureates and famous personalities are the delights of the festival. The rich heritage of knowledge truly makes it an event to definitely attend.

Highlights of the festival


The Jaipur Literary Festival turns 10, so a lot of events are on the calendar. 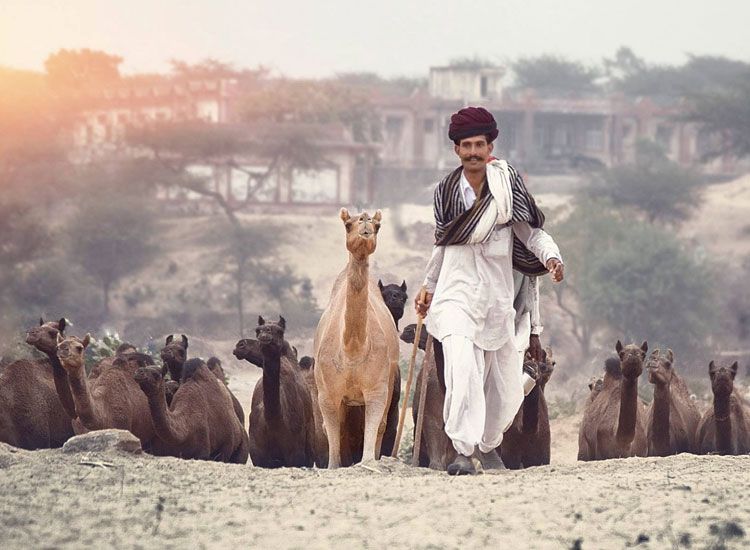 Nagaur Fair is the 2nd largest cattle fair in India. The 8-day festivities is a great time to witness the rustic appeal of Rajasthan. This carnival provides the largest platform for trading cattle, cows, bullocks, oxen, camel and horses. Visited by many tourists every year, Nagaur Fair captures the essence of Rajasthan. Folk and cultural competition keeps on happening side by side. Various games like tug-of-war, camel races, cock fights, etc. are organized for the entertainment of tourists.


The sights of Methi & Mirch (chillies) along the huge populace of cattle. 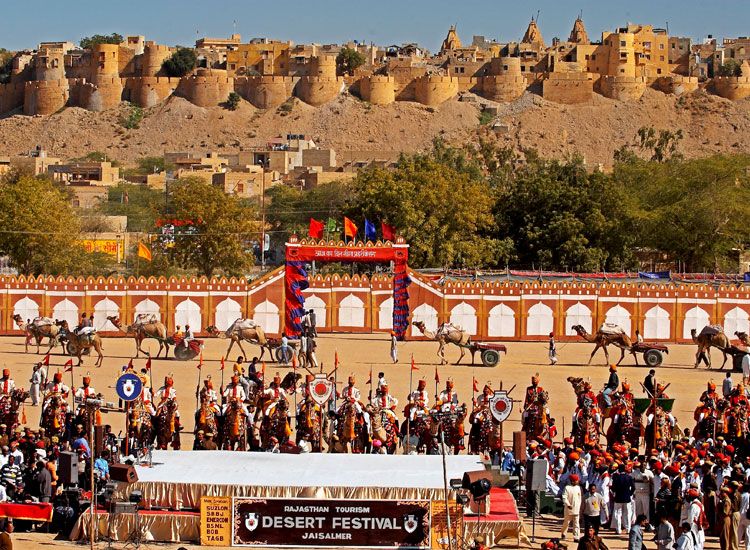 Jaisalmer Desert Festival celebrates the golden sands of the Thar Desert along with the rich cultural heritage under the moonlit sky. The Jaisalmer festival lasts for 3 days, where you can experience fancy camel ride, participate in camel races, polo matches, turban tying competitions and various other things. The folk dance performances in festival take you in a world of its own.

The major attractions of the Thar desert festival include snake charmers, puppeteers, acrobats, folk performers, fire dancers and various other things that will capture your heart. One of the major cultural festivals of Rajasthan, Desert Festival introduces you to the wonderful desert history, culture and lifestyle.


Camping in the desert dunes in traditional campsites.

A very first of its kind, Udaipur World Music festival in India celebrates world music. This music festival brings together global artists and bands from over 20 countries, including India, Italy, Iran, Spain, Egypt, Senegal, Macedonia, France, Portugal, amongst other nations. In accordance to how certain moods and music are associated with hours of the day, there are different performances organized during different times of the day.

The mornings start with romantic treat. During the sunny afternoons, hear soothing melodies. Evenings reverberate with high energy youthful concerts. If you have interest in music, this is your once-in-a-lifetime experience.


Breaking the barriers of language, the sensibilities of music conquers all.

Dates to be announced! 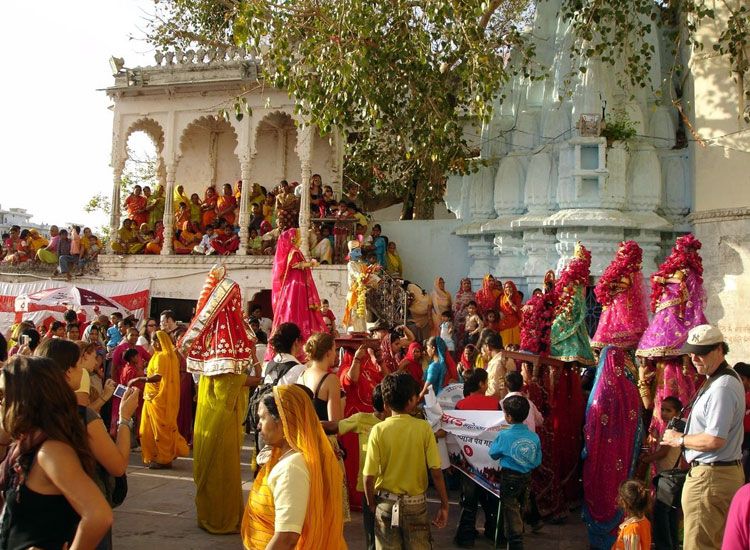 To experience the color and joy that fills the people of Rajasthan, visiting Udaipur during the Mewar festival is a highly recommended experience. The festival marks the arrival of spring. The whole of Udaipur gets drenched in vibrant colors. The festival is especially meant for women.

Women assemble to dress the images of Isar (Lord Shiva) and Gangaur (Goddess Parvati) and carry them in a procession through the city, finally immersing them in the waters of Pichola Lake. Dances, songs, cultural events and a firework display are some aspects of the festival. 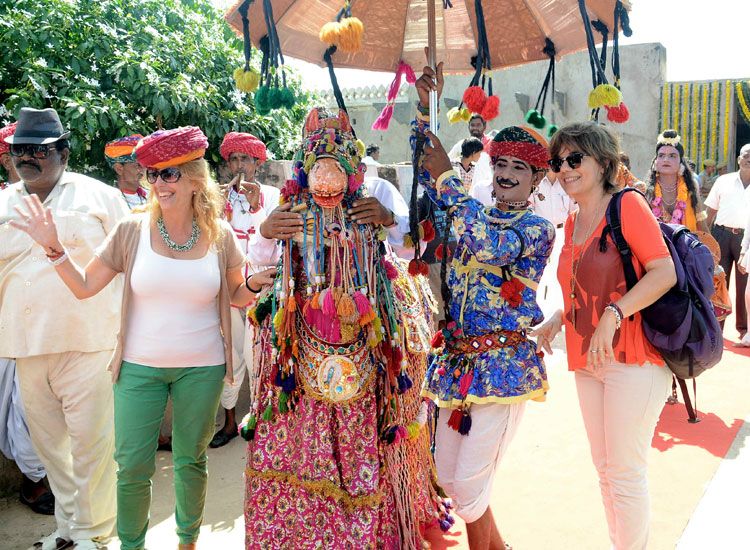 Abahaneri Festival is an effort to promote rural tourism. The rural setup and the charm of the heritage is quite compelling to explore. The festival is a mixture of live cultural evening, nukkad performances and village safari on camel carts. The Chand Baori, step well is the venue for day long live cultural performances.

Shehnai Vaadan, puppet show, Behrupia, Raavanhatha, Mayur Dance, Langa singing, Kacchi Ghodi,  Bhawai Dance are some delights of the celebrations. Craftsmen and artisans come from all over the state to participate in the Art and Craft exhibition. Get the real taste of the cultural heritage of Rajasthan in this festival.

Highlights of the Festivals 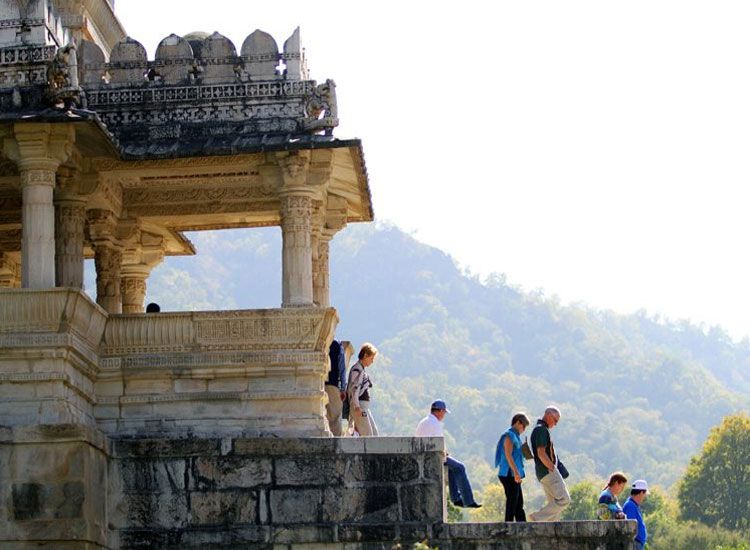 Attend yoga sessions while music plays in the background. Indulge in the adventurous activities. Watch the slew of performances by the Indian classical and folk performers of the state. Also, the highlight of the event is the floating lamps at the historic Nirvana Lake.


The highlight of the festival is the Horse show, where horses participated in various activities and the best performing horses.

[Have a Look for Great Itineraries to Rajasthan Tour]

Try Camping in Rajasthan at These Destinations