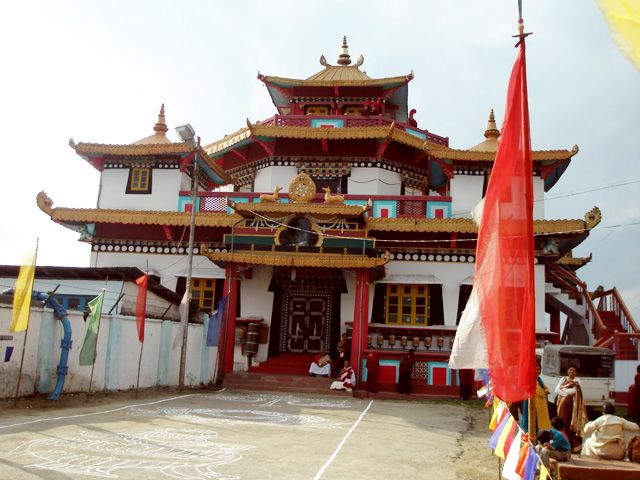 Talking about the prevailing religions in India, Buddhism is the one which is followed by a large number of people living in India and abroad. There are more than 25 Buddhist destinations all over the India.

The religion of Buddhism is a way to attain peace and salvation. A Buddhist monastery is a place of meditation, worship and teaching. These monasteries attract Buddhist pilgrims and travelers from all over the world.

Located amidst picturesque surroundings, Tawang Monastery is one of the largest Buddhist monasteries in India and one of the top tourist attractions in Sikkim. It is around 400 year old and was founded by the monk ‘Mera Lama’, a contemporary of the 5th Dalai Lama. It is perched at a height of 10,000 feet above in Arunachal Pradesh. Another name of this monastery is “Galden Namgyal Lhatse” and put forth an interesting collection of Thangkas (Tibetan painting on cloth).

In the prayer hall is the large glided statue of Sakyamuni (the historical Buddha) housed. Other attractions of this monastery include the colorfully painted windows decked with motifs. Its library houses a wonderful collection of Thangkas, scriptures, manuscripts and images. The road to Tawang Monastery requires a traveler to cross the Sela Pass, the second highest motorable pass in the world.

Located 2 kilometers away from Ghoom, a town in Darjeeling, Ghoom Monastery is perched at an altitude of 2,400 meters above sea level. This monastery was built in 1875 by Lama Sherab Gyatso and is the largest among its contemporaries-Phin Sotholing Gompa.

The importance of the hill lies in the fact that it is home to one of the most popular and oldest monasteries ‘Ghoom Gompa Monastery’. It has a 15 feet high statue of “Maitreya Buddha’ and has images of two Buddha’s disciples ‘Chongapa and Chenrezi’. Taking photograph inside the Ghoom Monastery is chargeable. The cash needs to be dropped into the donation box.

Shanti Stupa is one of the most impressive religious center in Ladakh. This popular Buddhist Indian monastery situated atop of a hill at Changspa village. This white-domed structure was commissioned by a Japanese organization to commemorate 2500 years of Buddhism. His Holiness the Dalai Lama established this structure in 1985. The Shanti Stupa is amazingly spectacular and is illuminated with colorful lights, which makes the holy shrine more beautiful and appealing.

[ Plan your trip to this region with these Ladakh Tour Packages ]

One of the most isolated monasteries in Zanskar region of Ladakh, Phugtal Monastery is a Buddhist Gompa located in the autonomous region of Ladakh, Northern India. Founded by Gangsem Sherap Sampo, a popular Tibetan Guru, this monastery plays host to around 70 monks and considered one of the holiest pilgrimages for Tibetan Buddhists.

Phugtal Gompa is entirely made up of 4 prayer rooms and a library. The only means to reach the monastery is trekking, which ensures that it remain isolated.

One of the most famous Tibetan Buddhist monasteries in India, Rumtek Monastery was constructed by the 9th Karmapa Wangchuk Dorje in the 16th century It is surrounded by natural treasures such as lovely streams and majestic mountains which makes it all the more chanting. Adorned with beautiful murals,

The monastery has four-storied main temple with a golden sculpture on its roof. The four statues of the guardian of the universe- Virupaksha, Virudaka, Dritarashtra and Vaishravana- are enshrined in the monastery. It’s all encompassing beauty is further heightened by the divine presence of sages and monks.

[ Plan your trip to this region with these Sikkim Tour Packages ]

One of the six major monasteries of the Nyingma School of Buddhism, Mindrolling Monastery is located 10 kilometers south of the center in Clement Town. The monastery is built on a large scale and boasts of a large college, manicured garden and the five-storied Great Stupa.

The five-storied Great Stupa is over 60 meter tall and is believed to be the world’s largest stupa. It contains a series of shrine rooms displaying relics, murals and Tibetan art. There is an impressive 35 meter high gold Buddha statue dedicated to the Dalai Lama.

Located at a distance of 18 kilometers from Leh, Thiksey Monastery is a wonderful monastery in this region and a fine specimen of Ladakhi art & architecture. It is one of the most beautiful monasteries of this region and belongs to the Gelukpa Order of Buddhism.

The monastery has 12 storied complexes which are housed with several items of Buddhist art such as stupas, thangkas, statues, wall paintings and swords. The architecture of this monastery resembles the architecture of the Potala Palace in Lhasa Tibet, also known as the title of ‘Mini Potala’. There is wall pillar inside the premises which is carved with Buddha’s ideas and preachings.

Located in the southwest corner of McLeod Ganj in Dharamsala, the Tsuglagkhang Complex comprises the official residence of the Dalai Lama, Tibet Museum, the Namgyal Gompa and the Tsuglagkhang itself. It is premier attraction for visitors to McLeodganj as well as a pilgrimage site for Tibetan exiles.

The complex is a functional temple and residence, not just a tourist attraction. The temple is a simple yellow temple where the Dalai Lama holds discourses. It contains 3 beautiful images of Padmasambhava, Avalokitesvara and Sakyamuni. It shows respect keeping your voice low and don’t interfere with real worshippers. It is open to visitors from 5 AM to 8 PM.

Plan your vacation with these Himachal Tour Packages

A part of the Sangha Community, Namdroling Nyingmapa Monastery is a place where Buddha’s preaching’s preserved together for worldwide proliferation. The monastery was established by throne-holder Kyabje Penor Rinpoche in 1963. Home to 500 monks and nuns, this monastery is known as a centre for pure upholding of the Buddha’s teachings.

Apart from this, the monastery also features a retreat center, which was opened in 1985. Around 30 monks have undergone a 3 year retreat in this retreat center. This 1 month retreat can be attended only by people of Buddhism faith.

One of the well-known monasteries in Kalimpong, Zang Dhok Palri Phodang is located atop of Durpin Hill, one of the two hills of the town. It is considered to be the most beautiful and counted amongst the largest monasteries in West Bengal. During the invasion of the Tibet region by the Chinese, rare scriptures were brought into this temple and monastery in 1959. Several Buddhist monks come here for prayers & meditations and reading of the sacred scriptures comprising of 108 volumes. The view from the hill-top is truly breathtaking.

[ Check out our Buddhist Tour Packages ]