Rajasthan is one of the most sought after tourist destinations in the world. Going for a holiday to Rajasthan will always provide a great experience to the tourists. The wide variety of attractions available in Rajasthan makes it a favorable tourist destination to tourists of varied tastes. In fact, it is this variety that helps in attracting a large number of tourists from various corners of the world. The variety includes desert, forts, palaces, museums, rich wildlife and a number of temples make Rajasthan tours a thoroughly enjoyable place. Bikaner is one of the most visited cities in Rajasthan. The presence of a large number of tourist attractions in and around Rajasthan makes it such a beautiful place. The temples in the city of Bikaner are major draw for the tourists. The Deshnok Temple is one of the most beautiful temples in Bikaner. Having a high spiritual significance along with a great architecture, you must visit the temple during Bikaner tours.

Deshnok temple is also known as Deshnok Karni Mata temple. The temple is dedicated to Karni Mata, which is an incarnation of the Goddess Durga who took birth in the 14th century. The goddess is believed to have miraculous power. The village in which the temple is located is also known as Deshnok, which means ten corners. The village is located 30 kilometers from Bikaner along the Jodhopur Road. The temple possesses a high a spiritual significance. There are a number of beliefs associated with the temple. On visiting the temple, you will come across a large number of brown rats in the temple complex. It is believed that these rats carry the soul of dead charans. Such beliefs attract a large number of devotees from different corners of the world. They come to the temple and offer sweets, grains, milk to the goddess during the aarti. Moreover, you can consider yourself really lucky if you get to see a white mouse as it is considered auspicious. The rats are such an integral part of the temple that wire grills had been constructed to protect then from birds of prey. A visit to the temple will surely be a unique experience as it will provide a close look of the various traditions and customs of the region.

The architecture of the temple is also a major attraction for the tourists. The various architectural features of the Deshnok temple like beautiful marble façade are a treat to the eye. Built by Ganga Singh, the temple also has domes and door made up of gold and silver. The doors impart a great look to the temple as they have images of the Karni mata and other deities. On getting inside the temple, you will also be able to see the image of the Goddess. It is enshrined in the inner spectrum.

There are lots of tour operators which offer packaged tour to the Deshnok temple. These tours are thoroughly enjoyable for the tourists as it provides you a close look of the Rajasthani architecture as well as the various religious beliefs of the region. 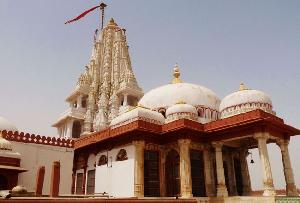 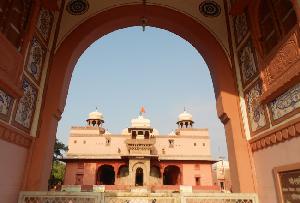