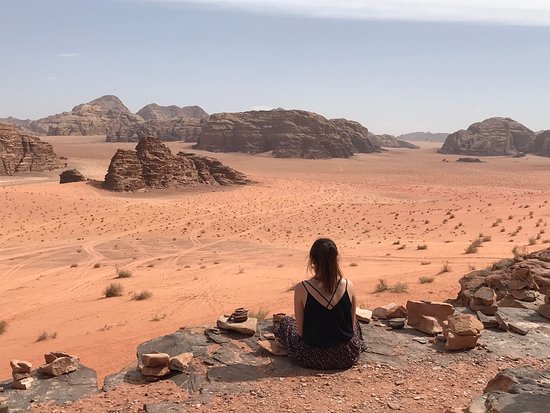 We cannot travel to other planets but we can fantasize about the distant worlds. Luckily, Earth is blessed with some of the unbelievable and jaw-dropping marvels that look otherworldly. From the glowing caves to the shimmering river and from the multi-colored geysers to moon-like landscapes, you can visit any of these places. They can make you feel like you have stepped into some other world. These places are just a plane ride away and to reach there you need not become an astronaut. Take a look at these spectacular places that will leave you captivated with their astounding beauty.

So, here are a handful of places on Earth that looks like other planets:

The biggest cave in the world and on the planet by volume as well as by cross-section, Son Doong cave was discovered in 2009 and opened to the public in 2013. It is bigger than we can even think due to which it is also known as an ‘infinite cave’. The ecosystem inside the Son Doong cave is as unique as it is large. There are underground rainforests, an underwater tunnel, a 90-m high calcite barrier, two enormous dolines, and 262-feet tall stalagmites, which is the largest stalagmite ever found. This place looks like another planet, which currently measures a total of 1.35 billion cubic feet. When it is officially connected with Hang Thung Cave by underwater tunnel it adds 1.6 million cubic meters in volume.

This place looks like heaven which also houses rare limestone pearls that are scattered in dried pools and microscopic organisms that thrive in the darkness. Visiting this place is like an adventure like no other.

The main cavern of Hang Son Doong is stretching more than 5-km in length and 650 feet in height is large enough to accommodate an entire New York block with 40-floor skyscrapers.

Formed over 30 million years ago, Waitomo Glowworm Caves is a wonderland that radiates with the distinctive luminosity of specific glow worms. Millions of these tiny creatures live inside the deep caves and radiate light, which makes it among the places on earth that look like fantasy. These caves are spread over two levels among which the upper level is dry and includes the entrance. The lower level comprises the river running through the cave chambers.

The magnificent view of the glowing cave can be enjoyed with a boat ride. While floating slowly below the millions of glowing worms, it does not appear like you are on Earth. The experience surely gives you a feel of exploring the other planet while living on planet earth.

The glow worms are not really worms. However, they are fly larvae that emit a phosphorescent glow. It is their waste and snot that actually glows. This may not sound good but you can see from the photos that the glowing caves look incredibly fascinating.

One of the most beautiful deserts in the world, Wadi Rum is renowned for its breathtaking landscapes. The dramatic sandstone and basalt mountain jutting out of its sandy floor make it unique. It is also addressed as the ‘Valley of the Moon’ owing to its moon-like landscape. However, the red-colored sand, natural arches, and towering cliffs impart the look of Mars.

The stunning rock formations, caverns, narrow gorges, and fascinating rock arts coupled with the beautiful night sky offer an awe-inspiring view of the landscape of the desert that looks like you are on another planet.

Jabal Umm ad Dami is the highest mountain with an elevation of 1,854 m. From the top of which one can see the Red Sea and even the Saudi Arabian border on clear days.

Mauna Kea resembles a lunar crater and has many of the same chemical and physical characteristics as extraterrestrial soil. It is a dormant volcano that last erupted approximately 4,000 years ago. It has served as the testing ground for the space rovers as a part of ‘in-situ research utilization’ (ISRU) conducted by the National Aeronautics and Space Administration and international partners.

[ Plan an adventurous trip to Ladakh with Indian Holiday. ]

The summit of Mauna Kea is home to the world’s largest observatory for optical, infrared, and sub-millimeter astronomy. Owing to its volcanic terrain, rock distribution, and soil formation; it is an ideal location to perform tests as it offers lunar and other planetary environments. No wonder, it is famous as one of the alien-looking places on earth.

It is the tallest sea mountain in the world with an altitude of 33,000 feet from the bottom of the ocean floor.

Renowned for its lunar landscape, Lamayuru is one of the places on earth that look like space. This quaint little village of Ladakh is offbeat yet popular for its incredible landscapes that boast of spectacularly odd geological formation.

The history of Lamayuru dates back to the 10th century. The scholar named Mahasiddha Acharya Naropa laid the foundation of the monastery and prayed, which caused the drying up of a lake. As the water receded, the place started to get moon-like craters. The moonscapes carved into the Greater Himalayas leave everyone spellbound. It is also one of the places on earth that looks like the moon.

To get a more clearer view of this Moon-like place in India, hike to Meditation Hill, and witness the breathtaking views of the valley. On a full moon night, when the light falls on the multi-shade mountains, it looks like you are standing between the craters of the Moon.

[ Read the Most Interesting Things To Do in Leh Ladakh. ]

What is to look like a Moon or Mars? Or what it is like to witness the starry sea or glowing caves? Did this thought make you pack your bags and leave for any of these places that look like other planets?

Let us know, which one of these otherworldly places look more fascinating to you and why?