India is replete in power spots. “Shakti peeths” as they say! The country has myriad myths and religious lore woven in and around it. No wonder pilgrimage tours to India have been a popular travel package over the years. The land and its religious history have serenaded several deities. Lord Shiva is an eminent one, who according to lore resides amidst the Kailash ranges. The Holy Mt. Kailash Mansarovar Yatra thus allows the “Shiv – Bhakts”, disciples of Lord Shiv to pay homage to their God. Considered as one of the most pious “Tirtha Sthaan”, the place has several sacred spots. To experience the peace and serenity of this journey, one needs to travel with the correct intention. 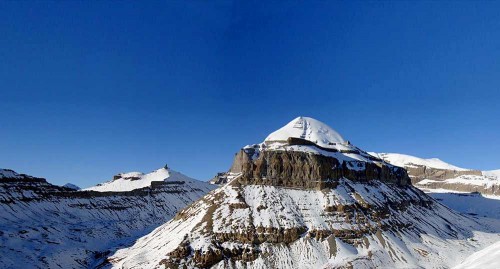 Journeys such as Kailash Mansarovar Yatra always have something or the other to teach you. These could be religious beliefs or personal philosophies of various communities. For instance, on your trip you might come across fellow Tibetan travelers who would leave a strand of their hair, drop of blood, a piece of cloth or a small stone at the “Shakti peeth”. This signifies, as they return to their respective destinations, they leave behind all their pride, vice and prejudices. Ego, meanness and anxiety are all left behind and a new entity marches ahead with sublime ideals.

Destinations such as this, would allow you to lavish amidst nature’s own crest. Lake Mansarovar and Mount Kailash are situated at a distance of 865kms away from Delhi. It is a stunning summit emitting silver rays and dazzles with a spiritual aura of its own, standing tall at a majestic altitude of 6690 meters up the sea level.

A conventional Kailash Manasarovar Yatra itinerary would be for a span of 13 days. It would cover destinations such as Kathamandu, Darchen, Zuthul Puk, Chui Gompa, Kodari, Nyalam and Paryanga.

This holy “yatra” would allow you to explore the beautiful Mansarovar Lake that has a holy significance to the Hindus. It is one of the finest lakes and has an ancient lineage as per the history of Indian civilization. The lake with its serene turquoise waters is calmly set in between to gigantic mountain ranges, namely the Gurla Mandhata in the South and the Kailash range towards the North. In between you have the sister lake named Ravan Harda or Rakshas Tal stationed on the western side.

The journey also takes you to Gauri Kund that is situated as you proceed downwards from Dolma. This is also known as the Lake of Compassion as is mentioned in the “Shiva Purana”. This apart there is the “Om Parvat” that stretches across a vast expanse of the Tibetan Plateau and is located at an altitude of 4550 meters above sea level, having a depth of around 90 meters. The sight of the mountains and the quiet lake is mesmerizing during the winters. As you stroll around on your journey you would come across some places that are sandy or rocky. To add more charm to it, be there on a full moon night beside the Lake Mansarover and the scene is absolutely “picture perfect” like that of a fairy-tale world.