Ooty is also known as the Queen of Hill Stations. Churches in Ooty symbolize the spiritual calmness and are a perfect balance for the natural serenity of the gorgeous landscape. The vast canopy of the sloping hills is a home to the tribal people residing there.

It also encompasses huge amount of rare plants and trees that have miraculous healing properties. People mainly visit the Hill Stations of Ooty to rediscover their lost energy and vigor. The Ooty Hill Stations are located on the Western Ghats and the pleasant climate offers a superb vacation to the tourists. It is similar to the English summer and is perfect for the honeymoon couples!

Ooty lies at an altitude of 7,500 feet above the sea level and is also known as Udhagamandalam. Ooty is the headquarter of the Nilgiri Hills. There is a wide species of flora found at Ooty and they are significant because of their curative properties.

The fauna in Ooty also includes some of the rare animals of India. Churches in Ooty indicate the advent of Christianity and the consequent effect of that religious infiltration.

The religious amalgamation catered to the massive conversion that took place and so numerous Churches splurged up in the 18th, 19th and 20th Centuries.

They became the Summer Residence of the British Officers in India. An Amphitheater is located in Ooty. This has been formed from the four Hill Stations like the Dodabetta, Snowdon, Elk Hill and Club Hill. Trees Conifers and Pines lines up the way to Ooty and forms a tranquil way for the weary traveler. Its calmness and solitude is very attractive.

The blind ends of the sloping hills are an invigorating experience for the adventurous spirits. Botanical Garden present in Ooty is a gallery of some fine floral varieties. The situation is harmonized by the chirping birds and buzzing insects.

In the midst of this heavenly glory stand the Churches in Ooty , the perfect blend of peace and sanctity, showing way of solace to mankind. The most important Church in Ooty is the St. Stephen’s Church which has been constructed from the wood brought from Tipu Sultan’s Lal Bagh Palace in Srirangapatnam after he was defeated in the Battle of Srirangapatnam. Many other churches are found in Ooty. They are Union Church, St.Mary's Church, St. Theresas Church Holy Trinity Church, Thomas Church, Sacred Heart Church, and Kandal Shrine. 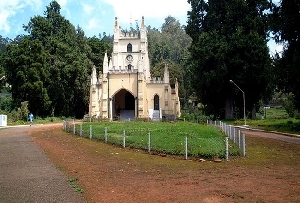 Things To Do in Ooty