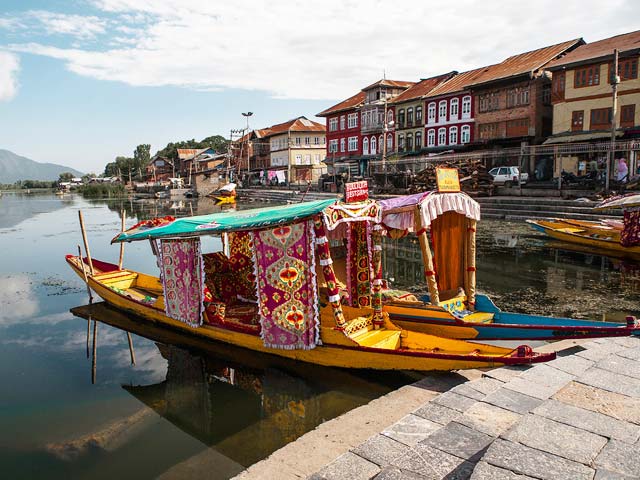 Also known as “Paradise on Earth,” Jammu and Kashmir in north India is one of the best tourist destinations for summers. During summers, it’s the verdant valleys with spectacular sights, that draw families to this valley nestled in the lap of the Himalayas. During winters, it has become a hub of snow and adventure activities.

With its natural beauty, religious importance and diversity of sights and things to do, it is no wonder that Jammu and Kashmir happens to be one of the top places in India for honeymoon, family holidays, adventure activities and pilgrimage.

One only becomes aware of the beauty of this part when presented with Kashmir in pictures. Here’s our photolog that brings out the diversity, awe-inspiring beauty and multitude of experiences through Kashmir in pictures, for it deservedly is one of the top tourist destinations and an evergreen place to visit in India.

Check out here the places to visit in Jammu, Kashmir & Ladakh with beautiful pictures:

Raghunath Temple is one of the most significant pilgrimage complexes in north India. It is located in Jammu city, and it was built by Maharaja Gulab Singh and his son Maharaj Ranbir Singh from 1853-to 1860. This Raghunath temple in Jammu has many gods. However, the presiding divinity is Lord Ram, an incarnation of Lord Vishnu.

Mata Vaishno Devi shrine on nestled on the Trikuta Hill near Katra is India’s second most visited Hindu religious shrine. Millions head to Ma Vaishno Devi every year to pay obeisance to the mother goddess and seek blessing.

[ Have a look on packages to Vaishno Devi Darshan. ]

Patnitop is a favored destination in Jammu and Kashmir for honeymoon and adventure. Activities like paragliding, ice skating and cool climes make it one of the top places to visit in Jammu.

Sanasar in Jammu is an ideal place for beginners to go for tandem paragliding as well as opt for paragliding lessons from the experts.

Boulevard Road in Srinagar is like a postcard from Venice or Greece. The road that passes by the Dal Lake is one of the most popular jaunts of the tourists visiting Srinagar. There are a lot of shopping options, street food as well as some of the best hotels located by the Boulevard Road.

With its rows of shikaras, floating markets and houseboats moored at the bank, Dal Lake is the center of activities in Srinagar. Hemmed in by Pir Panjal range of Himalayas, Dal Lake is the life line of the city. Flotilla of shikaras ferry tourists and locals alike. The scenic view of the Nishat Bagh and Shalimar Bagh, both build by Mughals forms the highlights of shikara ride in the Dal Lake.

One of the most spectacular Mughal Gardens in Srinagar, Nishat Bagh with Zabarwan mountain in its backdrop is the second-largest terraced gardens built in Kashmir. The garden was commissioned and designed by Asif Khan, the elder brother of Nur Zehan an father in law of Shah Jahan. In total there are 12 terraces lines with avenue of Chinar and Cypruss trees that begins from Dal Lake and reaches up to the hill that forms the front facade of the garden.

Built by Mughal Emperor Jahan Gir for his wife Nur Jahan, Shalimar Bagh is one of the most spectacular charbagh style gardens in India. Considered the zenith of Mughal horticulture, the Shalimar Bagh is 3 terraced garden fitted with water fountains and lines by Chinar trees.

Nestled on the east bank of the Dal Lake with Zabarwan mountain as its backdrop, this garden is one of the favored haunt of tourist and love struck couples.

Kheer Bhawani, so-called because of the kheer or the pudding that is offered to propitiate the goddess, is the most important temple for the Kashmiri Pandits, the historical followers of the Vedic religion in the Kashmir region. This temple is located 14 miles east of Srinagar in the village of Tula Mula.

Hazratbal is the most revered Muslim shrine in Srinagar. It is believed that the holy relic belonging to Muhammad Prophet are stored inside the shrine of Hazratbal.

[ Check out famous Islamic sites to visit in India. ]

The famous city square of Srinagar, Lal Chowk is known as the site for political meetings and protests. It was that the first prime minister of India hoisted the National Flag of India in 1948 and promised a referendum to Kashmiris to choose their political future.

The floating vegetable market in Dal Lake is lifeline to the supply of food material to the numerous houseboats moored on the edge of the lake.

Gondola Ride in Gulmarg is the highest in India and one of the top things to do in Gulmarg, one of the popular honeymoon destinations in India.

Good snowfall and favorable terrain makes Gulmarg the best ski resort in India. From December till March, Gulmarg offers the best ops for skiing, snow boarding, ice skating and heli skiing ops in India making it one of the top places for winter holidays in India.

[Checkout Places to see in Gulmarg. ]

The golf course in Gulmarg is one of the highest in India. Gulmarg Gold Resort has hosted quite a few major golfing events in India and definitely rates as one of the most scenic golf courses in India.

For discerning travelers, the recently opened Khyber Himalayan Resort & Spa offers an elegant and comfortable stay suffused in luxury. Its beautiful location coupled with state of the art amenities and gracious hospitality makes it one of the best luxury hotel experiences in Himalayas.

Hike to Thajiwas Glacier atop ponies is most popular among the honeymooners and families on tour to Sonamarg. More adventurous soul take the trail and trek to this beautiful glacier.

Every Year, thousands of pilgrims embark on Amarnath Yatra, an important Hindu pilgrimage to seek blessings from Baba Barfani, the snow incarnation of Lord Shiva. You need to register for a permit and obtain a medical certificate to be eligible to take the Holy Amarnath Yatra. Amarnath Yatra pilgrimage starts either from Baltal near Sonamarg or from Pahalgam.

Nowadays Amarnath Yatra by Helicopter packages are available to cater to the elderly and devotees with less time up their sleeve.

Emerald water streams flowing with the lush Himalayas as the backdrop and tranquil surrounding makes Sonamarg one of the popular places for honeymoon in North India.

If you love angling, obtain a permit from the forest department in Srinagar and embark on an adventurous fishing tour in Sonamarg. Trouts are the most commonly found around here. You could also do a one-day trek to high-altitude lakes in the region to fish for trouts. Remember that a day permit only allows you to fish 6 trouts a day. Tourists could get up to 6 days’ permit at once from the department.

Zoji La near Baltal is where you leave the stark landscape of Ladakh behind and enter the lush meadows and verdant valleys of Kashmir. The Zoji La pass connects Kargil to Srinagar and is one of the strategically important mountain passes on the Leh Srinagar highway.

View of the snowcapped Himalayas, lush valleys are strewn with towering Chir and Deodar forest and tranquil surrounding makes Aru Valley one of the top places to visit in Pahalgam. Together with Betab Valley, Gulmarg, and Srinagar, Aru Valley in Pahalgam is one of the most sought-after honeymoon destinations in Kashmir.

So named after the shooting of the Hollywood hit movie Betaab, this Betab valley is one of the most verdant places in Pahalgam. There are several treks that could be embarked upon from here.

One of the most adventurous, thrilling and spectacular road trips in India is the Ladakh Trip on Motorcycle. The bikers follow either the Leh Manali Highway or the Leh Srinagar Highway to reach Leh by road in one of the most spellbinding adventures on motorcycle in India.

Bike trip to Ladakh entails crossing some of the highest motorable mountain passes and riding across challenging but awe-inspiring terrains that include the Morey Plains and Gata Loops on Leh Manali Highway.

[ Booking open for Adventures trip to Ladakh by Bike. ]

One of the dreams of every aspiring road tripper in India and even around the globe, the climb of Khardung La offers ride through one of the highest motorable roads in the world. Scaling Khardung La by road on motorcycle or car, whose summit varies from an elevation of 17, 582 feet to 18, 379 feet depending on whose version you believe, is one of the most popular activities in Ladakh.

Of course, many experiments and trials have come to the conclusion that same is not true and the vehicle just appears to be moving due to the optical illusion caused by the landscape.

One of the most popular things to do in Leh Ladakh is the camel safari up on Double Humped Bactrian Camels in the sand dunes of Hunder, also referred to as the desert in the sky. Hunder is a popular camping site in Nubra Valley.

One of the top attractions in Ladakh, Shanti Stupa in offers a majestic panorama of the Leh Town. It is a peace pagoda built by the Japanese and one of the popular places to visit in Leh. The Shanti Stupa holds a relic of Buddha at its base which was enshrined by his holiness Dalai Lama.

One of the top things to do in Leh Ladakh, Pangong Tso is one of the highest saline water lakes in the world. Nestled at an altitude of 14, 270 feet, the Pangong Lake is known for its crystal clear brackish water which changes different shades of colors at a different times of the day.

[ Checkout most interesting things to do in Ladakh. ]

In recent time, Pangong has become one of the recurrent features in Bollywood movies and many an advertisement commercial. The lake first shot into prominence after the climax scene of the super hit Bollywood movie 3 Idiots was shot here.

Festivals in Leh Ladakh offer a peek into the ancient Tantric Buddhism and Tibetan Buddhism that forms the culture of this region. Festival tours in Ladakh offer great opportunities to aquatint yourself with the culture, art and lifestyle of Ladakh.

Leh Palace, the former residence of the royal family of the Ladakh region is one of the popular tourist attractions in Leh town. It also houses a small museums with relics and artifacts.

If you are fortunate enough, there are chances that you may sight the elusive and endangered snow leopard during your visit to the Hemis Biosphere Reserve or during one of your treks to upper Himalayas in Ladakh region.

Spituk monastery is yet another top attraction to visit in Leh Ladakh, 8 kilometers from the city center.

One of the most awe-inspiring sights near Leh town, Thiksey Monastery is affiliated with the Guleug sect of Tibetan Buddhism. One of the most striking things about this gompa is its resemblance to the Patola Palace, the residence of the Dalai Lama in Tibet.

Located at an altitude of 11,800 feet, this 12-storey structure houses various items of Buddhist arts that include chortens, stupas, thangkas, paintings, murals, and artifacts. The monastery also houses the largest Maitreya Buddha statue which rises up to 15 meters covering 2 storeys of the building.

Many adventure seekers head to Ladakh to do trekking in some of the most challenging yet spectacular terrains of the Greater Himalayas, Zanskar Padum, Markha Valley, Trans Himalayan, and Chadar some of the popular treks in the region.

Digital marketer by profession and a keen traveler, amateur photographer and avid book reader by passion, Nikhil Chandra’s writing and photographs have been published in various travel magazines and blogs including Travel & Leisure, Seat 61, Mode&Tendances, Oryx Magazine (Qatar air inflight magazine) among others. Holding a masters in Literature and Marketing Management, Nikhil Chandra applies his educational qualifications, professional experience, and wander wisdom to write on a range of topics that includes search engine, PPC, content marketing, photography tips and travel. He summarizes himself succinctly as a writer here and there and on this and that.