The most popular memorial in Delhi, Raj Ghat was set up in honor of the Father of the Nation - Mahatma Gandhi, who was assassinated on 31st January 1948. The memorial is located on the Ring Road on the way to ISBT and is about four km away from Janpath. The memorial is made in black stone and the last words of Mahatma Gandhi - 'Hey Ram' is inscribed on it. Every Friday (the day of his assassination) prayers are held. There is also a museum dedicated to Gandhiji near the memorial which houses photographs and some of his personal memorabilia.

Shanti Vana, located near Raj Ghat is the memorial of the first Prime Minister of India-Pt. Jawaharlal Nehru, after he died in the year 1964. The memorial, now a beautiful park adorned with many trees, is visited by all foreign dignitaries.

The memorial of the first woman Prime Minister of India, Mrs. Indira Gandhi, is at Shakti Sthal. Considered a renowned statesman all over the world, Indira Gandhi's last rites were performed here and the memorial was built in her honor. A grey-red monolithic stone marks the site where she was cremated following her assassination. A prayer service is organized every year on her birthday (November 19) and death anniversary (October 31st).

Vir Bhumi, located next to Rajghat is the memorial of the sixth and youngest Prime Minister of India, Rajiv Gandhi. The first son of Indira and Feroze Gandhi, Rajiv Gandhi was assassinated by an LTTE suicide bomber, at Sriperumbudur, on May 1991. His last rites were performed at Vir Bhumi and a memorial was been set up to honor this young visionary leader. A Prayer Service is organized every year on his birth (August 20) and death anniversary (May 21).

Also known as Victory Bank, Vijay Ghat is the memorial where India's second Prime Minister Lal Bahadur Shastri was cremated in 1966. Prayer Services are organized every year on his birthday (October 2) and death anniversary (January 11).

To visit the memorials in Delhi, the nearest airport is the Indira Gandhi International Airport located 23 km southwest of Central Delhi and the domestic terminal at Palam is 5 km away from the international terminal. Taxi and coach transfer is available from both International and Domestic Arrivals. 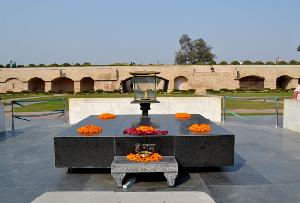