Apart from being the capital of India, Delhi is a fascinating city with pleasant contradictions. Comprising of Old Delhi and New Delhi, the city is home to famous tourist destinations like the Laxmi Narayan Temple, India Gate, Jama Masjid, Red Fort, Rashtrapati Bhavan, Humayun's Tomb, and the vivacious shopping bazaar of Chandni Chowk. One such tourist attraction in Delhi is the Bahai Temple, popularly called Lotus Temple.

One of the most beautiful architectural temples in India, construction of the Bahai Temple was completed in 1986. At night, one can enjoy its elegant beauty even from a kilometer away. This grand temple, termed by many as the Taj of modern India, belongs to the Bahai sect.

The temple represents the Bahai faith, which is broad in its outlook, scientific in the influence it exerts on the hearts and minds of the people. It signifies the purity and the universality of the lord and people of any faith can enter this temple to offer their prayers. This temple happens to be the seventh and most recent Bahai House of Worship in the world.

The structure of the Bahai Temple is made of pure white marble in the shape of a half-opened lotus, reaching a height of more than 40m, and is surrounded by deftly groomed lawns. This architectural wonder is made of a combination of marble, cement, sand and dolomite. One can see 27 giant white petals of marble in a lotus shape, springing from nine pools and walkways indicative of the nine unifying spiritual paths of the Bahai faith.

Visited by over four million people annually, the Bahai Temple is located on Bahapur Hills in South Delhi. This gleaming structure remains closed to tourists during morning and evening prayers, Tuesday to Sunday from 10.00am to 4.00pm.

An exquisite creation and a remarkable specimen, the architecture of Bahai Temple in Delhi is surely praiseworthy. Created for the followers of Bahai-ism, the Bahai Temple or the Lotus Temple is a must visit as it is considered to be an architectural marvel.

Bahaism is an independent religion which propagates the idea that all human beings originate from a single race and they should unite together in order to form the global society. The founder of this religion Baha-ullah propagated this thought around 17th century.

The Bahai Temple or the Bahai House of Worship is composed of 27 concrete petals, arranged in three groups around nine sides of the structure. The petals spring from a single podium like structure which gives the building its elevated look. The structure made of concrete and white marble which gives the temple the shape of a lotus. It is topped by a dome. The 26.6 acres of area is covered by sprawling greenery and beautiful water bodies.

The Bahai Temple consists of a dome shaped structure, which gives the look of the innermost part of the lotus and consists of 54 ribs intercepted with concrete shells. The central hall inside the Bahai Temple has nine arches which provide support to superstructure.

The architecture of Bahai Temple is a fascinating work of art that is more than an architectural wonder. The beauty and serenity of the place will instill in you the desire to communicate with your Lord. Visitors to this temple are from different caste and creeds and it reinstates the basic motto of Bahaism.

It is located in South Delhi near the Nehru Place.

Built for the followers of Bahaism.

Shaped in the form of a lotus and made of concrete and marble it is a remarkable architectural specimen.

The monument is in South Delhi and tourists can take auto rickshaws, taxis, buses or the Metro Rail.

The Bahai Temple has their own 15 minute prayer sessions for four times everyday. The temple remains closed on Mondays

Charges for Photography: Permission given on request

The tourists who come to Bahai Temple also visit the nearby attractions of Bahai Temple. The Bahai Temple in Delhi also known as the House of Worship is the religious place for the people following the Bahai Faith.

The beautiful architecture of the Bahai Temple draws a number of tourists to this place. The nearby attractions of Bahai Temple are also equally fascinating and recreate the charm of the city of Delhi.

Built during the 18th century this temple is dedicated to Goddess Kali. The temple is visited by hundreds of pilgrims and especially during the Navratri celebrations.

the Satpula is a dam built by Muhammad Shah Tughluq to reduce the scarcity of water in the city. The dam has seven arches and sliding shutters that regulate the level of water.

It is one of the largest Indo Muslim shrines of India. Dedicated to the Muslim saint Nizammuddin, the shrine is a complex that contains the graves of Jahanara and Amir Khusrau. 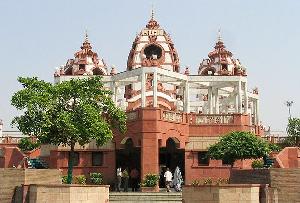 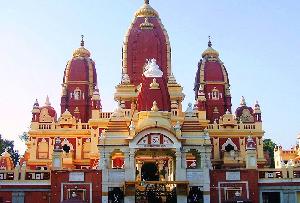