The Urdu Park is located just adjacent to the Meena Bazaar in Jama Masjid, Delhi. This beautiful park offers lots of greenery amidst pleasant conditions.

Here you will find ustads (experts) of various unique professions. The profession may range from ear cleaning to body massage to Champi (head massage). Believe it or not they are the real experts and better than many who work in big hotels or saloons with sophisticated gadgets. A special appreciation for them especially the ustads of body massage. They have extensive knowledge of the human anatomy and know all the pressure points of the body like an acupressure expert. They will make you lie on a mat and will apply their magical (as they claim) oil all over your body. After the massage you will feel so fresh that you can run a marathon.

The park is in itself a good resting and cool place away from the chaotic streets of Old Delhi. The main attraction of the park is the wrestling match that is held on every Sunday at the end of the park.

Urdu Park is one of the renowned parks in Old Delhi and draws many tourists all through the year. The lush greenery of the park offers a cool resting place for tired visitors. Given below are some fast facts about Urdu Park which will help tourists plan their Delhi itinerary.

This Old Delhi Park is located In front of the imposing Eastern gateway of Jama Masjid, near the Meena Bazaar.

Either by local buses which will take you directly to the park from various points within the city, or by auto-rickshaws and taxis or metro rail.

Open: On all days

Admission: Free and open to all

Parking: Free and open to all

Urdu Park is a quiet and pleasant park situated close to the Meena Bazaar of Jama Masjid in Delhi. The park is famous for its wrestling matches and the various kinds of body massages that visitors can indulge in. A prominent tourist attraction in Delhi, Urdu Park boasts of many other important monuments and destinations in close vicinity. Some of these are:

The Red Fort or the Lal Quila is situated on the western bank of the river Yamuna and is the largest of old Delhi's monuments. This red sandstone citadel is an eloquent reminder of the golden Mughal era and it forms the magnificent centerpiece of emperor Shahjahan’s medieval city of Shahjahanabad (Old Delhi).

Jama Masjid - a marvelous specimen of the grandeur of Mughal Architecture, was built by emperor Shahjahan in 1656. Originally known as the Masjid-i-Jahanuma, it is the largest mosque in India.

Chandni Chowk, located opposite the majestic Red Fort, is one of the oldest shopping avenues in Delhi. Your Delhi holiday would be incomplete without a trip to this vivacious market.

Salimgarh Fort was erected in 1546 by Salim Shah, son and successor of Sher Shah Suri. Built on an island of river Yamuna, this fort later came to be used as a state prison. The leaders of Indian National Army were imprisoned here in 1945.

Kashmeri Gate is named so because it led to a pathway to Kashmir. Built in 1835, the gate first gained national importance when Indian freedom fighters fired volleys of cannon balls from this gate to the British and used the area as an assembling place for building war strategies.

Located ½ km from Kashmeri Gate, at the intersection of Church Road and Lothian Road, St. James Church was built in 1836 by the famous Colonel James Skinner in a Greek cross design. The beautiful church was said to be an imitation of St Paul's Cathedral in London but according to Percival Spear the church was actually modeled on a church in Venice

Situated on the bank of Jamuna River, Rajghat is an important historical place because Mahatma Gandhi's last rites were performed here on 31st January, 1948. The memorial stone of Gandhi is square in shape and made of black stone. 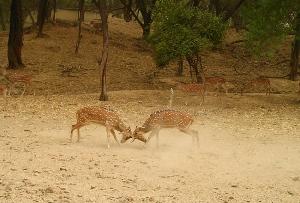 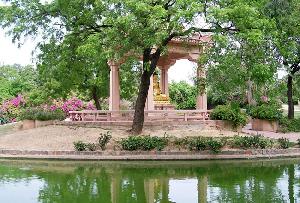