The exquisite and fascinating temples in Jaipur have been drawing a huge number of tourists throughout the year. These temples are such popular spot among tourists as the temples are not only beautiful and exquisite in their design but also a great instance of the rich culture and tradition of the region. As a result, these temples with a high spiritual significance not only attract a huge number of devotees but are also attractive to the regular tourists. The intricate architectural design of the temples in Jaipur will surely mesmerize you with its beauty.

After witnessing the design you will have no option but to salute the craftsmanship of the creators. There are many temples in Jaipur. Temples like Govind Devji, Galtaji and Mata Doongri are some of the most popular among them. The Birla temple is also a must visit temple in Jaipur. The design, the spiritual significance, the aura and the splendor of these temples provide just the right combination to the tourists. Though there are a number of temples in this place yet the above mentioned ones are not to be missed at any cost. Each of these temples is truly an excellent piece of architecture that continues to mesmerize people with its beauty.

10 Famous Temples in Jaipur that will leave you mesmerized.

Visit Birla Temple in Jaipur, which is one of the most famous examples of architectural magnificence. The temple is dedicated to Lord Vishnu and his consort, Goddess Laxmi, Birla Temple is also known as Laxmi Narayan Temple. Thus, it attracts a large number of devotees as well as regular Indian and foreign tourists. Built by the Birla family, the temple has beautiful white marble and three tall spires that will leave you fascinated. You can also see the Hindu scriptures on the stained windows and scenes of Bhagavad Gita on the walls here.

One of the famous Krishna temples in Jaipur, Govind Dev Ji Temple houses the idol of Lord Krishna that has been brought from Vrindavan by Raja Sawai Jai Singh II as he was a believer of Lord Krishna. On your visit to this temple in Jaipur, witness its architectural finesse. Govind Dev Ji Temple is also famed for a legendary fact and thus, enforces a swarm of tourists to visit here. It is believed that Lord Krishna’s great-grandson, Bajranabh carved the idol that resembled the face of the deity during his incarnation on earth.

Galtaji Temple is one of the most revered temples in Jaipur. Since many monkeys can be seen here, Galtaji Temple is also known as the Monkey Temple. A Hindu pilgrimage site, Galtaji Temple dates back to ancient times and exhibits architectural splendor. Perched on a mountain pass in the Aravalli Hills, the temple has a natural spring that flows from the hill to seven sacred water tanks within temple premises. Among these tanks, Galta Tank is the holiest one and never dries up.

Among the famous Jaipur temples is Moti Dungri Ganesh Ji Temple situated on top of a small hill. Derived its name from Moti Dungri Fort and is dedicated to Lord Ganesha. And though the temple was built in 1971, the idol worshipped here is said to be more than 500 years old. The location and the aspect that the trunk of Ganesh Ji is placed in right instead of left, as followed in most temples, makes it one of the most-visited temples in Jaipur.

This is one of the oldest and most popular temples of Jaipur and was built by Maharaja Sawai Jai Singh I. Garh Ganesh Temple was built even before the king laid Jaipur’s foundation. From the top of Garh Ganesh Ji Temple in Jaipur, you can witness mesmerizing views of the city. Also, Lord  Ganesha is worshipped in his child form at this temple and is also one of the rare temples in India where Ganesh Ji doesn’t have his trunk.

You must have heard the name of this temple before. Akshardham Temple is not only famous in Delhi but among temples of Jaipur as well. It is one of the most visited religious places in Jaipur and is known for its brilliant fusion architecture. Visit Akshardham Temple in Jaipur and pay homage to Lord Narayana. Also, it is not among the ancient temples in Jaipur but attracts a lot of tourists due to its popularity.

Also known as Sanganer Jain Temple, Sanghi Ji temple is built in red stones that add to the beautiful architecture and sculptures of the temple edifice. It is a known tourist attraction and one of the best temples in Jaipur that sends you to a different era. As the temple is underground, it is only accessible to Digamer saints. You can also see the idol from Sanghi Ji Temple for a limited period. The temple also has a ‘Nij’ Mandir with three pinnacles at the center of which there is Parshwanath, who wears blood of seven serpents.

If you haven’t seen a black-colored idol of Hanuman Ji, visit Kale Hanuman Ji Temple. One of the unique temples in Jaipur, this temple is said to be 1000 years old and receives many tourists throughout the year. Situated near Hawa Mahal, it gets a lot of visitors on a daily basis. On weekends, Kale Hanuman Ji Temple is jam-packed with devotees who come here to get the blessings of Lord Hanuman.

Chulgiri Jain Temple in Jaipur, also called Siddha Bhoomi, is one of the famous Jain temples of Digambara shrine. It is believed that Indrajeet and Kumbhakaram have also visited this Jaipur temple for meditation. The main temple is located on a hill and has 1000 steps. You can also see three stunning sculptures of Tirthankars, Shree Parshavnath, Mahaveer Swami, and Neminath made of white stone. Every year in May, an event is organized at Chulgiri Jain Temple similar to a festival called Panch Kalyanak that was organized back in May 1982.

One of the lesser-known shrines in Jaipur, Sun Temple is among the famous temples in Jaipur. The architecture here exudes a unique charm. The temple dates back to the 18th century and honors Surya Devta. Located inside the Galtaji Temple complex, you can witness spectacular views of the city, making Sun Temple one of the best places to visit in Jaipur. Sunset from this temple is a beautiful sight to hold. Also, do not miss clicking some postcard-worthy pictures. 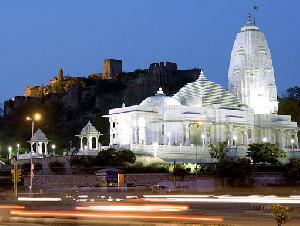 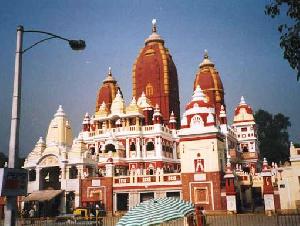 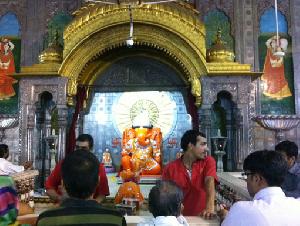