Renowned as the ancient citadel of the Kachwahs clan, the Amber fort is one of the prominent tourist attraction in Jaipur and a UNESCO world heritage site in the city of Jaipur. Often the next point of discussion when someone talks about Jaipur, Amer Fort in the outskirts of the city is a classic example of the Rajputana legacy. Being one of the very popular forts of Rajasthan, Amber Fort in its structure beautifully blends Hindu and Rajput style of architecture. Credits for such a majestic creation of red sandstone and marble goes to Raja Shri Maan Singh Ji Saheb (Maan Singh I).

Here is complete guide of Amber Fort in Jaipur

From the 11th and 16th century, the town of Amer was under the rule of the Kachhwahas clan. At that time Amer was known as Dhundar. Founding stones of the remarkable Amber fort was laid during the reign of Raja Mann Singh; the Kachhwaha king of Amber. However, complete expansion of this structure was done by his descendant Jai Singh I. In the due course of the next 150 years, certain improvements and changes in its architecture were carried out by the string of successive rulers of Amer.

Known for its artistic style, Amber fort or Amer fort is divided into four different parts. The architectural layout of the fort is such each part of it comes with a separate entrance. The prime entry of the fort is to be done through Suraj Pole (Sun Gate), which opens at the first main courtyard, known as the Jaleb chowk. This huge courtyard has a history of being the victory parade spot of the armies on returning from battles. The women folk of the Royal family used to witness the parades through latticed windows of the structure.

Reason behind naming it as Sun gate lies in its location, which faces the rising sun in the east. Jaleb Chowk was built during the reign of Sawai Jai Singh. The first courtyard of the Amber fort comprises various internal structures that held great purpose and significance for the royal family. These are mentioned as below:

Points of Attractions Inside Amber Fort

One of the prominent structures that steals attention of the tourists is the Sila Devi temple. The temple is located at the right side of the first courtyard and has a silver covered double door. On the inside lies the statue of Sila Devi; an incarnation of Kali or Durga, the sanctum of which is also made of silver. It is believed that the Sila Devi temple was the worshipping place of the Rajput Maharajas and the royal family. The temple is also associated with being the spot of animal sacrifice in the name of religious rites during the Hindu festival days of Navrathri.

Another impressive structure in the first courtyard of Amber Fort, Ganesh Pol is the official entry in into the private palaces of the Maharajas. Named after the Hindu Lord Ganesh, this gate is a three tier structure that is adorned by a variety of frescoes. The Ganesh Pol was built during the reign of Mirza Raja Jai Singh.

Up from the stairway of the Jaleb Chowk is the second courtyard of Amber Fort that is also known for its remarkable structures. These are described as below:

Diwaan-e-Aam, which is also known as the ‘Hall of Public Audience’ boasts of a structure that has two beautiful rows of ornamented pillars. These rows open on three sides. The story of Amber fort describes this hall as the venue where all the complaints and needs of the general public were listened by the King.

This beautiful hall in the premises of Amber Fort stands for the ‘Hall of Private Audience’. As per its naming, the hall served as a meeting place of the King and his ministers, special guests from other states and friends. The interiors of the hall flaunts a beautiful mosaic glass work.

The third courtyard of the Amber Fort belonged strictly to the Maharajas and the royal family. It has primarily two buildings, separated from each other by a garden; designed like that of a Mughal creation. Prominent structures of this courtyard are described as:

Sheesh Mahal or the ‘Mirror Palace’ is one of the highly beautified structures of Amber fort. The interiors of the hall has colored glasses and mirror mosaics on the walls and ceilings. One can also see paintings and flowers, entirely made up of pure glass, studded on the ceilings and walls of the hall. The mirror work is so wonderful, it can convert the light of a small candle into thousands of glowing stars.

Sukh Niwas or Sukh Mandir used to be the residence of pleasure for the Kings. It is said that the Kings of the fort with their queens and mistresses used to spend time here. Designing of the hall has been kept completely artistic. Doors of ivory and sandalwood make such an impression.

Palace of Man Singh I

The oldest part of the fort, the Palace of Man Singh I is located to the south of the third courtyard. It was built during the reign of Raja Mann Singh I and is the main palace in the royal property. The interiors of the palace boasts of pillared pavilion (baradari), colored tiles and frescoes.

Fourth courtyard of the Amber Fort belonged to the royal family women and also the mistresses of the Kings. The courtyard consists of numerous living rooms that were used by the queens as their residences. Besides, the premises of this courtyard also has a hall of private audience, known as Jas Mahal, and the structure of Jas Mandir as its prominent attractions.IWe are make this easy for you to explore all of these by including in your golden triangle tour package. 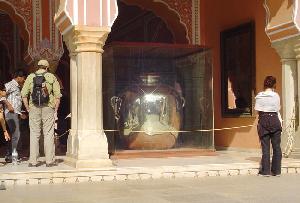 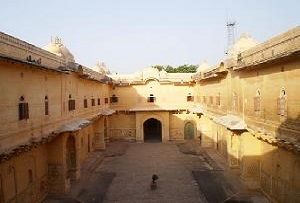 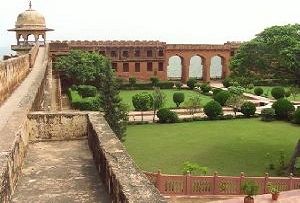 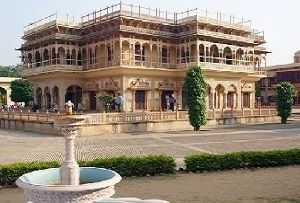