Places to Visit in Badrinath

Badrinath is one of the holiest towns for Hindus. Surrounded by the Nar and Narayan mountains, Badrinath is located in the Chamoli district of Uttarakhand, along with three other spots of the Char Dham pilgrimage circuit, Kedarnath, Yamunotri, and Gangotri. With the backdrop of Neelkanth mountain top, this town is believed to be the land of Lord Vishnu, and therefore, has many folklore and legends related to Badrinath. Visit Badrinath tourist places like Badrinath Temple, Tapt Kund, Neelkanth Peak, Alka Puri, Bheem Pul, and more to learn about the region's glorious past and rich culture. From revered temples, religious baths, and glistening waterfalls to quaint villages, there are numerous famous places to visit in Badrinath.

Here are some of the best tourist attractions in Badrinath that you should add to your itinerary to make your trip memorable:

Tourist Places to Visit in Badrinath

It is a part of four religious sites of the Char Dham Yatra of Uttarakhand. Badrinath Temple is one of the most legendary temples in India and is dedicated to Lord Vishnu. Nestled at an altitude of 3,133 m above sea level, Badrinath Temple is a holy site thrived by many devotees every year. Moreover, the incredible landscape of the surroundings offers the perfect ambiance for spiritual connection.

Owing to its proximity to Badrinath, Neelkanth Peak is among the most revered mountains in the region. With a height of 6,507 m above sea level, Neelkanth Peak is also a significant peak in the Garhwal region. You can trek to the Neelkanth base camp that starts from Charan Paduka, located 3 km from Badrinath Temple. The massive height of 4,270 m above sea level of the base camp offers a thrilling experience and mesmerizing view of pristine nature.

Located in Mana Village, Vasudhara Falls originates from Nar and Narayan mountains. This is an offbeat tourist place in Badrinath, which is also a perfect place to visit for nature lovers who wish to spend quality time amidst serene environs. This waterfall meets with the Alaknanda River after plunging from 400 feet. It is believed that it is the resting place of the Pandavas. To reach Vasudhara Falls in Badrinath, you must trek from Mana Village, which offers a breathtaking view of the stunning landscape.

Located on the bank of the Alaknanda River, Tapt Kund is a natural hot water spring near Badrinath Temple. Devotees visit the Tapt Kund for a holy bath before going for the darshan in Badrinath Temple. The water of the Kund is believed to comprise medicinal properties which cure skin diseases. This place is also known as Agni Teerth, and tourists flock here to relieve themselves of their sins.

This is a natural stone bridge built on the Saraswati River near Badrinath. It is believed that this bridge was discovered by Bheema, one of the Pandava brothers. As per the legends, the Bheema threw a stone between the mountains to create a path to cross the river, resulting in this bridge. This spectacular bridge is situated over the gushing Saraswati River and offers a breathtaking sight. This is one of the most-visited places in Badrinath to witness the enchanting beauty of the region.

Mana Village is the last village before the Indo-Tibet border, situated on the bank of the Saraswati River. Surrounded by mighty Himalayan ranges in Chamoli district, Mana Village is designated as a 'Tourism Village' by the Uttarakhand Government. Situated just 3 km from Badrinath at an altitude of 3,233 m above sea level, this scenic village is one of the best attractions near Badrinath, which tourists should add to their Badrinath trip itinerary.

Named after King Pandu, Pandukeshwar is where he meditated to get rid of the sin of killing the sages. As per the legends, King Pandu was living here with his wives Kunti and Madri. Later on, Arjun also meditated here during the exile of 12 years to seek blessings from Lord Indra. Pandavas also built a Vasudev Temple here, which you should visit during your Badrinath trip.

One of the seven Badris, Yog Dhyan Badri Temple is a religious place. People visit a popular place in Badrinath to seek Lord Vishnu's blessings. King Pandu installed a bronze idol of Lord Vishnu and meditated there. This place is also considered the holy abode of Lord Kuber and Lord Udhava. Therefore, a large number of people visit here during their Badrinath trip.

Alka Puri holds a religious significance among Hindus. It is the source of River Alaknanda, situated on Balakun Peak's base. Nestled at an altitude of 4,600 m above sea level, the Alka Puri glacier spreads into two valleys that lead to Satopanth and Gaumukh. This majestic glacier offers a breathtaking view of the pristine surroundings. Also, it is believed to be an abode of Kuber. The Alaknanda River originates from the Alkapuri glacier and proceeds towards Devprayag after touching the feet of Lord Badri in Badrinath.

Located in Badrinath, Mata Murti Temple is a sacred Hindu Temple. It is dedicated to the mother of twins named Nar and Narayan. It is believed that Mata Murti was a devotee of Lord Vishnu and prayed with utmost devotion. As a result, Lord Vishnu was pleased with her devotion and took birth in the form of twins. Every year, a festival is organized in September at the temple. You can attend the festival and learn about local history and culture.

This is a religious site near Badrinath, and it is believed that Lord Brahma exists in this place until today. Situated on the bank of the Alaknanda River, Brahma Kapal is among the revered places in Badrinath. People come here to immerse the ashes of their deceased family members in the Alaknanda River. It is believed that if the funeral rituals of the deceased person take place at this holy place, they are bound to attain salvation.

Located 3 km from Badrinath, Charan Paduka is where you can see the footprints of Lord Vishnu. Situated on the Narayan Parvat, this holy place thrives many tourists from all over the country. Tourists have to trek to reach there, and trails offer a spectacular sight of the valley. People believe that when Lord Vishnu comes to the Earth for the first time, he sets foot here.

At this sacred site, Rishi Ved Vyas documented the Mahabharata with the help of Lord Ganesha. As per the Puranas, Veda was also written by Maharishi Vyas in this cave. You can also witness the scripts written all over the interior of the Vyas Cave.

Among the popular holy sites in Badrinath, Sheshnetra is famous for numerous religious reasons. As per the legends, Lord Vishnu relaxes here on Ananta Shesha. Situated on the opposite bank of the Alaknanda River, Sheshnetra Temple comprises a rock on which you can see the natural imprints. It is also believed that Sheshnetra guards the sacred site of Lord Badrinath.

Perched at an altitude of 4,600 m above sea level, Satopanth Lake is a high-altitude lake. It also holds a religious significance among locals. It is believed that Lord Shiva, Lord Vishnu, and Lord Brahma bathe in the sacred water of the lake. You can trek to Satopanth Lake and enjoy nature walking.

Situated near Tapt Kund, Narad Kund is also a hot water spring where devotees dip before visiting the Badrinath Temple to seek blessings from Lord Badri. According to mythology, Adi Shankaracharya recovered the idol of Lord Vishnu from here. This place is named after Narad Muni, who wrote Narad Bhakti Sutra here. This is one of the popular places to visit in Badrinath for devotees. 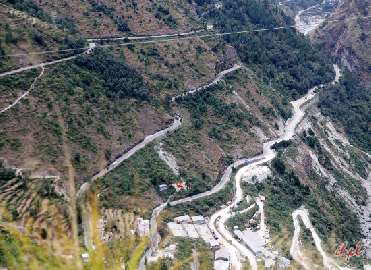 Q: What are the best Badrinath tour packages offered by Indian Holiday?

Ans: Here are some of the top Badrinath packages we offer -

Q: What should I buy in Badrinath?

Q: Do I need woolen for Badrinath Yatra?

Q: What kind of hotels in Badrinath are available?

Ans: Being a major pilgrimage spot in Uttarakhand, Badrinath hosts many government-run and private guesthouses and hotels. You can choose them according to your needs and budget.