Arts And Crafts Of Uttarakhand

Uttarakhand, a mountainous state, enjoys special privilege for being that part of the subcontinent wherefrom the Indian Civilization developed and proliferated to the pan-Indian dimension. Therefore, this region has been an excellent repository of diverse cultures since the intermingling of Khasa and Kirati cultures that took place here ages ago.

However, the tradition of painting in Uttarakhand remained confined only to what earlier used to be the Garhwal kingdom. The art of Miniature Painting flourished in Garhwal under the influence of Mughal and Western Pahari schools, and that too without any feudal patronage. Therefore, the arts and crafts of Uttarakhand, of which a wide variety exist, demand and indeed deserve a closer look.

Arts and Crafts of Uttarakhand - The Performing Arts

The performing arts of Uttarakhand, like most other folk cultures in India, revolve around rustic music and dance. The colorful tribes and clans have the indigenous dance forms that they perform with local instruments and song accompaniment. The Bhotiya Dance and the Langvir Dance have commonly performed dances in Uttarakhand.

The Crafts of Uttarakhand:

The wood carving of the region is breathtaking for its simple, beautiful designs. Wooden front doors carved with floral designs, animals & fishes stand out for their simple beauty. The carving on one's front door is supposed to be symbolic of his prosperity. In Garhwal & Kumaon, the facade of the dwelling units' upper stories is wooden and artistically carved.

Garhwal is famous for Mughal-style paintings. Apart from that, the folk Art known as aipana is a specialty of Kumaon. It is a local adaptation of alpana, derived from the Sanskrit lip-to plaster with fingers and is practiced by the womenfolk. The other schools or types of paintings practiced in this region are the pitha, the art form used to decorate the seat of Siva on auspicious days with geometrical patterns, and chowki, the (center) of Lakshmi and Saraswati, using floral and traditional designs.To know more Click here!

In every part of Garhwal and Kumaon, traditional goldsmiths make traditional ornaments using motifs and patterns thousands of years old. The ornaments come in a variety of gold, silver, copper, and brass. 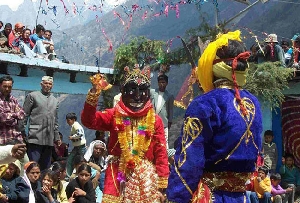 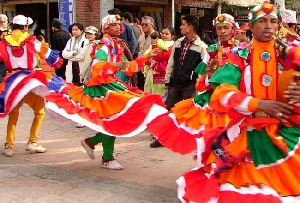